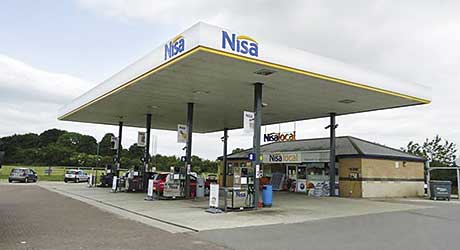 WHOLESALER and symbol store company Nisa earlier this year launched its own-brand fuel offering in partnership with Greenergy and now has three fully Nisa-branded forecourt stores including one which recently opened in Shildon on the outskirts of Bishop Auckland, County Durham.
As well as the own-brand fuel Nisa branding is also visible on pole signs and canopies.
Nisa’s retail development director Raj Krishan says the new look allows Nisa branding to flow from the forecourt to the store without confusion.
And since it became a Nisa-branded unit with the the Nisa range of grocery products, business at the Nisa Local store in Shildon has boomed – with fuel volume up 14.2%, retail sales up 21.3% and footfall up 15.3%, and that was before an alcohol licence was granted, Krishan said.
“The other two open stores are in Wrexham and Sheffield, however there are more in the pipeline following a very good response from retailers interested in the Nisa branded forecourts and we are currently developing these prospects,” he added.
“Nisa has undertaken extensive research on understanding the forecourt consumer and shopper missions and has updated its offer to reflect the different shoppers in forecourt stores.
“Many existing members that have already taken on board advice and services provided by Nisa following the research have seen double digit growth,” he said.