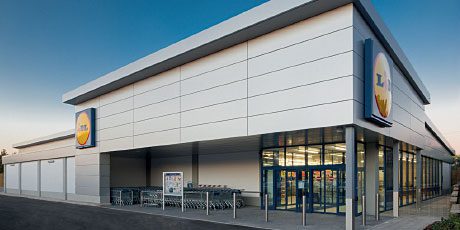 RETAIL chain Lidl says its first branding campaign in Scotland has boosted customer numbers by more than 20% and has led it to launch a recruitment drive for positions in its stores and at its Livingston regional distribution centre.

And the firm now plans to spend £30m on store refurbishment and developments, including new units in Kirkintilloch and Rutherglen, and an extension to the Livingston warehouse.
But it has no plans to follow the mainstream supermarkets and open c-store-sized branches.
The TV campaign, called Lidl Surprises, aims to shake off the chain’s reputation of being first and foremost a discounter.
Instead it wants consumers to think of it as a company that buys high quality produce in large quantities, distributes it efficiently and passes on savings.
TV ads made by an agency that has worked with Apple and other high-end brands highlight some of the group’s premium food products including a chocolate pudding and Parma ham.
And the firm’s PR manager for Scotland, Alasdair Fowle, said it had seen an almost immediate effect.
“Since the branding campaign started – especially the television aspect of the campaign – our stores have seen a huge surge in customer numbers, ” he said.
Lidl is also said to be attracting more affluent shoppers to its stores with research firm Nielsen reporting that the proportion of ABC1 customers among Lidl shoppers increased from 25% in 2011 to 41% in 2012. Its busiest stores in Scotland are said now to be those in relatively affluent areas.
Managing director of Lidl Scotland, Ross Millar told Scottish Grocer the firm had hoped for a positive outcome from the ad campaign but the speed of the consumer response had surprised him.
The branding push, which has been launched first in Scotland, followed developments in recent times that included the introduction of in-store bakeries in its Scottish stores, a major expansion in fresh and chilled food, the re-merchandising of the stores and significant extension of its Deluxe range of premium food products.
Despite that, the first word that would spring to many people’s mind if asked to describe Lidl was likely to be ‘cheap’, Millar acknowledged.
“In fact,” he said “the first thing we think about when we buy anything is its quality.”
He added: “It’s been a tough few years for everyone in Scotland but Lidl has continued to grow from strength to strength. The fact we are now looking to extend our distribution centre and recruit over 500 new permanent employees is not only a good sign for Lidl but is also great news for Scotland.”