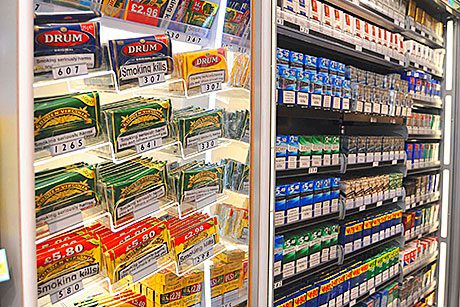 There’s often a lot of news about tobacco. But it’s important to remember that, in normal commercial terms, it’s a vitally important product category for c-stores. How do you make the best of it? And what’s new in the market?

HOW much is tobacco worth to Scotland and the rest of the UK’s retail outlets? The answer is ‘a lot’ and in more ways than one. First there’s the revenue itself. You’re talking big numbers, though given the amount that is taken in duty and VAT there’s only a small percentage left over as margin for the retailer.
But if you sell in reasonable quantities it’s still an important cash contribution. And there’s more to it than that. Adult smokers frequently become very regular customers and many also buy soft drinks, newspapers, confectionery, lottery tickets and more.
At tobacco firm JTI, head of trade communications Jeremy Blackburn explained some of the numbers.
The Scottish tobacco market is currently worth around £1.5bn and there are an estimated 1.1m adult smokers in Scotland.
Within cigarettes there’s a clear consumer move to cheaper products, those in the value or economy segments. Value is the fastest-growing part of the Scottish market accounting for 38.1% volume share of the total cigarette market and growing substantially ahead of the rate for the total UK market at 11.6% year on year.
The mid-price sector accounts for 29.4% of the Scottish cigarette market and premium cigarettes account for 16.6%.

Roll your own (RYO) tobacco is currently the market’s star performer. JTI calculates that in volume terms, in the UK, it is now bigger than any of the various price segments of the cigarette market.
The UK’s roll your own (RYO) market is currently worth £1.7bn. Worth over £130m, RYO is performing very strongly in Scotland’s independent and symbol stores, reckons JTI, where it sees value growth of 16.4% year on year.
At Imperial Tobacco, regional sales manager for Scotland, Lee Schofield also stressed the size of the market and noted the performance of RYO.
There are over 12m adult smokers in the UK and each year they spend around £13bn on their preferred products, she said.
“The UK roll your own market retail value is currently £1.75bn. RYO may only account for 12% of the market in terms of retail value but it makes up 26% of the tobacco market in volume terms. This is up by around 1.5% year on year.
“The economy price sector is showing significant growth in RYO, currently experiencing 30% plus growth in volume terms year on year,” she added.
The consumer desire for value has other effects too. PMPs have become almost ever-present and the days when many retailers could choose to sell above RRP seem in the distant past. PMPs are likely to become more important still in the period when large stores are dark and small stores can retain uncovered gantries.
But it isn’t the whole story. There are still premium cigarette fans out there.
And the premium brands are important, they provide margins to retailers that are often well ahead of other tobacco products
And at different price points there has been innovation. In particular, several companies have introduce capsule cigarettes in recent times.
So how are the tobacco firms responding to today’s market?
Imperial’s Schofield said: “When it comes to product choice, 60% of shoppers say cost is their key priority.
“On a regional level, Imperial Tobacco’s RYO portfolio in Scotland has seen its market share grow to over 51%.
“GV Smooth has seen its share of the RYO market increase from 6.23% in February 2012 to 7.44% in February 2013. Golden Virginia Classic currently occupies over 30% of all RYO sales.”
In cigarettes, she said the economy-priced sector is growing at around 8% year on year.
“Brands such as the JPS Silver range have shown sales increases month on month with the brand now holding a market share of over 9%.
“JPS Silver has also been extended with the launch of JPS Silver Superkings 10s and 20s and JPS Blue Superkings 10s, to reflect the increasing numbers of adult smokers who are purchasing economy cigarettes above king size. Currently 47.2% of economy cigarettes purchased are above king size.”
“In December Imperial Tobacco’s sub-economy priced Player’s brand moved to a 19s pack size for both king size and superkings SKUs. The value-seeking trend, prevalent in the tobacco market, has led to a growth in market share for 19s packs.”
But premium and other categories are still important, she said.
“Tobacco brands from the higher-priced segments should not be overlooked as despite the challenging economic conditions, cigarettes from the premium-priced sector still account for around one in four of all packs of cigarettes purchased.
“Globally, capsule technology accounts for over 350m packs of cigarettes sold.
“Lambert & Butler Fresh Burst cigarettes offer consumers choice and control over their smoking experience, Fresh Burst gives adult smokers the opportunity to squeeze a capsule in the filter to release a fresh burst of flavour if and when they choose to do so.” 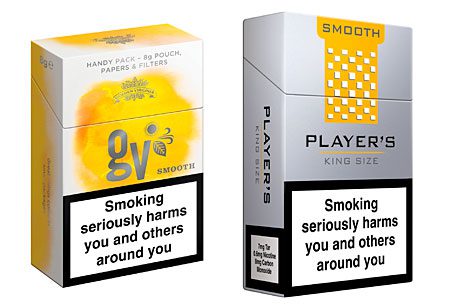 At JTI Jeremy Blackburn said the firm was addressing all key points of the market.
At the value end of the market it had a powerful player in its Sterling brand, which now accounts for more than one in 10 cigarette packs sold in the UK.
Sovereign Blue is a new cigarette range from JTI now available in both king size and superkings in 10s and 19s pack formats, with a £5.99 price-marked pack for both 19s packs
Winston is also available nationally in a £5.99 PMP.
In the growing and rapidly price segmenting RYO market JTI has the market leader in Amber Leaf. And since its launch into the value segment of RYO in January 2012, Sterling Rolling has shown a strong performance, leading to a 1.8% volume share of the market, Blackburn said.
In the mid-price sector of cigarettes JTI’s Mayfair range is said to be Scotland’s leading cigarette brand overall, accounting for a 16.4% share of the total cigarette market. JTI says Mayfair is currently outperforming its competitors with a 58.7% total share of the mid-price sector in Scotland.
It has also been active in the premium cigarettes sector with its brands B&H Gold, Silk Cut and Camel.
And the firm was an early innovator in UK capsule cigarettes – with Silk Cut Choice. More recently it has launched Sterling Fresh Taste on Demand, the UK’s first capsule cigarettes in a 10-pack. And B&H Dual is said to have achieved 21% volume share of the UK’s capsule cigarettes market since its launch last summer.
For BAT the UK tobacco market is currently all about value, with RYO brands doing well, price-marked packs becoming ever-more important and many tobacco brands and ranges being extended or repositioned to incorporate lower-priced products.
Within independents, BAT says it saw its Pall Mall rolling tobacco grow 71% in volume in 2012.
“Offering the right brand, the right blend, at the right price, Pall Mall RYO meets the growing need for value-for-money quality tobacco from an internationally recognised brand,” said Ronald Ridderbeekx, acting head of corporate and regulatory affairs at BAT.
Rothmans Gold and Rothmans Silver, launched in March 2012, were repositioned earlier this year. Gold and Silver Kingsize now has an RRP of £5.99, Super Kingsize is £6.04 and 10s are £3.12. “Retailers benefit,” said Ridderbeekx, “as cash margins remain the same as the previous price point.”
Price-marked packs continue to grow in volume. In Scotland they account for 36.6% of sales to date in 2013, up from 32.6% in the same period in 2012, says BAT. The value of PMPs in independents and symbols is even greater, reaching 58.2% of total volume to date this year, compared to 52.7% over the same period in 2012. Within the RYO category, PMPs have accounted for 40.9% of volume to date this year, an increase of 7.2% compared to the same period in 2012, says BAT.
Phillip Morris also notes the move towards the value segment and has responded.
“Consumers now expect more for their money without sacrificing quality,” said Zoe Smith, marketing manager at Philip Morris UK. “Recognising the importance of this segment, we launched Chesterfield, a high-quality cigarette with an RRP of £5.75 – a competitive offer in its segment.”
At the other end of the market, Philip Morris is launching Marlboro Ice Blast, which it describes as “the first fresh-to-fresh capsule cigarette”. Ice Blast allows smokers to release a blast of menthol by clicking a capsule device the firm calls the Iceball.
Ice Blast is available in packets of 20, with an RRP of £8.02.
Smith, quoting Nielsen, said: “The capsule market has been steadily growing since the start of 2012 when the first products were introduced. Currently capsules represent almost 1% of total cigarette volume, seeing a month on month sales growth of around 5%. Since the launch of the capsule segment, it has generated sales of £73m.”
Cigars and RYO specialist Scandinavian Tobacco Group has been targeting impulse outlets and plans to do more in convenience stores after boosting its sales force.
“We’ve added three reps to the 13 we were on and we do intend to put more resource into that channel,” STG’s Alan Graham said. “We’re also doing 200 cash and carry depot days, particularly behind Salsa and roll your own and that’s over and above our normal retail calls.”
On cigars it’s a tough market but he sees the biggest brands as much better placed than others.
“If we look at the figures the Café Crèmes and Hamlets are doing better than medium-sized brands by a long way. Even quite big brands are having a hard time.”
“If you’re a big brand it seems to have an effect, if you’re the very cheapest or truly niche it seems to have an effect.
“We’re lucky we do two truly niche products Natural American Spirit RYO and then Cafe Creme Filter Arome, which has about 92% of the flavoured cigar market.
“Those are both doing well.
“In cigarettes we see lots of 19s to hit price points. There’s similar activity on RYO with 8g and 11g packs.
“We’ve done £3.15 on 12.5g Salsa to make it the cheapest gram for gram in the sector.
“We are committed to keeping Salsa as the cheapest gram for gram and we just had some sales blitz activity in Glasgow just with Salsa £3.15 and they got about 150 new stockists.
“We are obviously trying to become more of a challenger in RYO. It doesn’t mean we’ve forgotten our bread and butter which is miniature cigars.
“We’ve done quite a lot of wholesale and cash and carry promotions to support the independents and pretty much covered all of the wholesale customers. We’ve already done one extra promotional slot for Café Crè
me this year and it seems to have worked, we have seen good uplifts in sales.”
At JTI, Jeremy Blackburn stressed that size is important in the cigar world.
“Miniature 10s is currently the best-selling cigar pack format in independents with 56.4% share of the market and growing, so retailers should stock up on brands such as Hamlet Miniatures to capitalise on this,” he said.