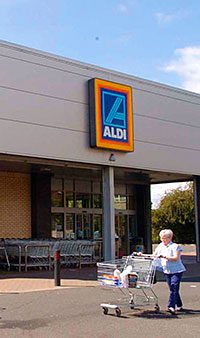 DISCOUNT store chain Aldi now takes a 3.5% share of the cash going through British grocery tills and competitor discounter Lidl takes 3% according to the latest market share findings from analyst Kantar Worldpanel. The research firm measured Aldi’s year-on-year growth at 31.5% with Lidl growing by just under 9%.

Kantar found that independent and symbol stores were up only 0.4% in the 12 weeks to 12 May 2013 compared to the year before.
And the researcher said the latest results confirm what it sees as the polarisation of the grocery market – with exceptionally strong performances from Aldi at the discount end of the market and from Waitrose at the premium end.
Waitrose held on to its record share of 4.9% reported last month, with growth of 12.0%, which was more than three times the market average.
Edward Garner, director at Kantar Worldpanel, said: “The success of Aldi, Lidl and Waitrose are clear examples of how shopping habits are divided across the country.
“For many consumers, the discounters are increasingly becoming part of the weekly shop – supplementing trips to the big four retailers and offering a convenient and cheaper option.
“This market polarisation also continues to pile the pressure on the big four grocers, with only Sainsbury’s beating the market and growing its market share this period.”