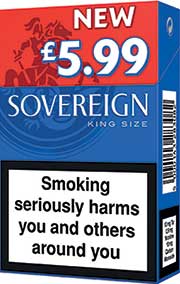 WITH household budgets remaining tight and the UK having the highest tobacco tax in the EU, roll-your-own is the biggest growth category for price-marked tobacco in Scotland. According to Neilsen, PMPs account for 40.9% of volume to date this year, an increase of 7.2% compared to the same period in 2012.
Price-marking is also important at the value end of the cigarette market. Tobacco firm JTI has extended its Sovereign brand with Sovereign Blue, available in a £5.99 PMP for both King Size and Superkings 19s.
Earlier this year, JTI also announced a new price point for Winston in a £5.99 PMP of 19. Blue and red varieties are the same price, and the red packaging has been redesigned.
JTI’s Jeremy Blackburn said: “It’s important that manufacturers and retailers demonstrate to adult smokers that they are getting the best possible choice and value when making their tobacco purchase. Price-marked packs do exactly this.”
Rothmans has held its PMP prices after the budget. Rothmans Gold and Silver Kingsize are available in a £5.99 PMP, Super Kingsize is in a £6.04 PMP while 10s are £3.12.
Ronald Ridderbeekx, from BAT commented: “With the increasing importance of value to adult smokers, we support retailers by ensuring that PMPs are available for the majority of our products. Retailers benefit as cash margins remain the same as the previous price point.”