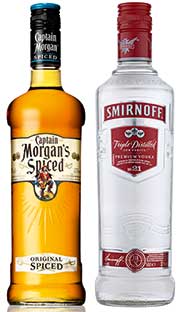 DRINKS group Diageo found the going tough in Britain and much of Europe in the first six months of its trading year, to the end of December 2012.
Trying to achieve what he called a “positive price mix, combined with “continuing tough trading conditions” meant sales were flat across Great Britain, the firm’s country director for GB Andrew Cowan said.
But Diageo’s share of the British market remained strong, at 32.9%, he added.
It had seen success from Captain Morgan and Red Stripe. But a number of factors had affected Smirnoff and Baileys sales.
Globally, six months sales after excise duty were up 5% to £6.039bn. Operating profit rose 9% to £2.029bn.