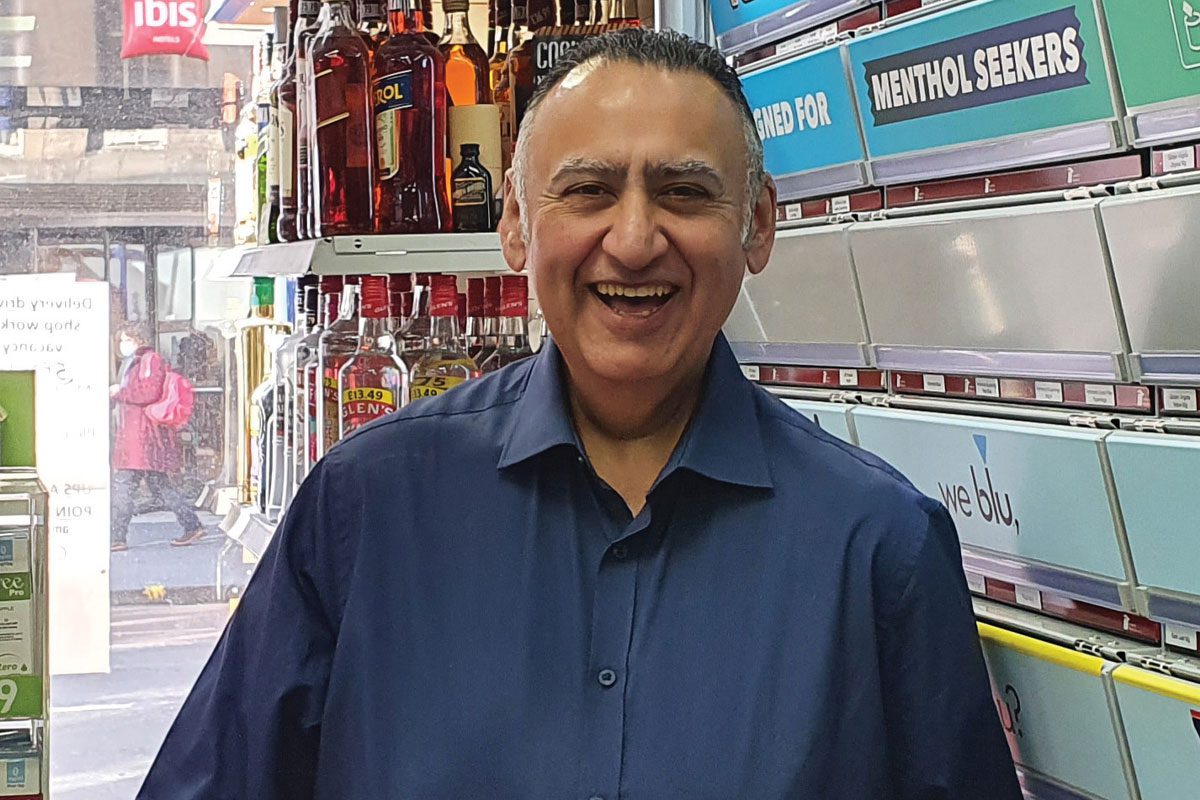 Tobacco Retailer of the Year
–supported by Imperial Tobacco

A return to form in Edinburgh

MANY retailers saw their footfall soar during lockdown restrictions, but city centre stores had a hard time of it as offices closed their doors, some temporarily and others for good.

At Mace, Edinburgh, retailer Mumtaz Ali was faced with turbulent trading conditions, but he’s more than managed to weather the storm and things have picked up again.

Located on the busy city centre thoroughfare of South Bridge Street, Mumtaz has seen first-hand the difference easing restrictions make – and it’s showing in his tobacco and vaping sales.

“It’s back to normality, I think, for people smoking. Vaping devices are where the increase in sales has been, we’ve seen a massive increase.

“Tobacco sales are still there, roll your own is about 30% and sticks are about 60% of tobacco sales,” he said.

The return of category sales was no guarantee for Mumtaz, who operates amidst fierce competition, in close proximity to both a Sainsbury’s Local and a Tesco Express.

However, Mumtaz’s approach to pricing, along with his excellent compliance and product knowledge, not only saw him crowned Tobacco Retailer of the Year at the Scottish Grocer Awards 2021, it’s also ensured customers know they’re getting value for money whenever they purchase from his store.

“RRP is the way to go. With Club and Players, JTI and Imperial have dropped their price with us. We’re selling at below RRP for the value brands on tobacco and cigarettes,” he said.

Value brands make up the bulk of tobacco sales at Mace, Edinburgh, but Mumtaz said there are still a few smokers who will pick up premium brands. These customers are well catered to, with Mumtaz’s range of around 120 tobacco SKUs ensuring existing adult smokers have plenty of choice.

However, vaping has been the real breakout star of the last few years, according to Mumtaz, with disposable brands in particular gaining serious ground.

“Vaping is a massive driver. We’ve increased our overall shop sales by 10% through vaping.
“The vaping side has been a god send, I used to go to the cash and carry in Glasgow every three months, it’s every two or three weeks now.

“It’s definitely not slowing down, we’re making maybe £600 per week and it’s good margin,” he said.

In addition to offering vaping pod brands such as Blu and Logic Compact, Mumtaz stocks Elf Bar and Geek Bar, disposable vape brands available in dozens of flavours and colours – which Mumtaz reckons some customers even coordinate with their outfits on a Friday or Saturday night.

Nicotine pouches have also been making up ground at Mace Edinburgh. Mumtaz offers Nordic Spirit, positioned in an eye-catching display cabinet by the till, and the brand seems to have caught customers’ attention.

“It’s massive, it’s flying out. It’s massive in Scandinavia and it’s starting to go here, they’ve thrown a lot of money into that,” he said.

Tobacco and vaping aren’t the only categories where Mumtaz is a cut above the local competition; the retailer also offers a vast range of single malt whiskies, in standard and miniature formats.

The whisky range is a hit with locals and tourists alike, and although Covid restrictions saw demand dip for the miniatures in particular, things are back on track and Mumtaz has reasons to feel positive about future.

Looking ahead to the summer, and festival season, Mumtaz was optimistic that this year will be “massive” if tourists kept home by the pandemic in 2020 and 2021 are able to make trips to Edinburgh again.

Those who do make the trip won’t need to cart heavy luggage around Edinburgh’s winding streets, as Mumtaz has diversified his convenience offer with the introduction of a storage service.

Mumtaz has signed up with Radical Storage, an Italian luggage storage network operating in over 500 cities around the world.

For customers, all they have to do is book storage online or through the Radical Storage app and head to Mace, Edinburgh on arrival, where a quick QR code scan from Mumtaz allows the retailer to register their arrival, store the luggage and send them on their way.

“It’s a money driver, it’s massive. From 9am until 10pm they can leave luggage here and it’s the one price, it doesn’t matter the size of the bag.

“It’s all scanned on a phone. Initially when we started the process it was a bit difficult, but they developed an app and it’s been a lot easier for us.

“I used to have a big fridge freezer in here, but it was costing too much to run. I halved my electricity bill by taking it out, I wasn’t selling much anyway, and it’s created space for storing bags.

“You have to do that in business, you can’t just stick to selling tins of beans,” he said.