ONE of the most memorable moments of the recent meeting of the Cross Party Group on Independent Convenience Stores at Holyrood was when Imran Saeed, of Duns News Plus, raised his hand to speak.
Intending to ask a question of Keith Brown, the Cabinet Secretary for Economy, Jobs and Fair Work, Imran spoke passionately for over five minutes about the increasing pressures piled upon small businesses, from the increase in wage costs, to banking, to business rates.
“And I didn’t even talk about what I wanted to talk about,” he told Scottish Grocer.
An outspoken critic of PayPoint, Imran was invited to attend the CPG meeting by SGF president Abdul Majid, after the pair clashed on the PayPoint Pay Fair page on Facebook.
“I hate PayPoint. That’s what I went to speak about. I really don’t like the way they treat us,” he said. “But in the context of the meeting I couldn’t bring that up. We had to ask questions, which is why my question was ‘where’s our living wage?’.
“As retailers, we’re expected to pay a living wage to our employees, but we don’t get the same consideration.”
Imran said neither he nor his father (who owns the business) had known the trade to be so difficult as it is today.
“When Dad first came here his task was to get the takings up. He got up to £20,000 a week without alcohol or groceries. He was always innovating, but trends change. And we’re not making money like that any more, while our costs just keep going up.
“The recession didn’t hit us that hard in Duns. You won’t find a shop here that’s closed, but the majority of them will not be paying rates, because they’re under the threshold. We’re over the threshold so we have to pay £6,000 a year. We’ve been to appeals, but it’s a waste of time.

“We try and do things the right way and just get more obstacles thrown at us. The local Co-op has more footfall, a bigger store and 50 dedicated parking spaces, but somehow I’m paying more than them per square metre. Where’s the fairness in that?”
It isn’t only the council that Imran feels has piled the pressure on. The banks too, he says, have been less than helpful.
“Banks are definitely an issue. They make out that they’ve set so much aside for loans for small businesses. But they’re giving nothing. All they’re doing is turning overdrafts into loans.
“At one time we had an overdraft for £30,000 and we needed that. Businesses rely on overdrafts. And they’re killing us by taking them away. How we’ve survived, I don’t know.”
These are issues he raised at the CPG, and was broadly happy with the response he received.
“The cabinet secretary seemed quite knowledgeable on the trade and I liked that,” he said.
However, as a member of the CPG on Convenience Stores and the Economy, he will be returning to Holyrood this month, when he aims to get stuck into the subject of PayPoint. 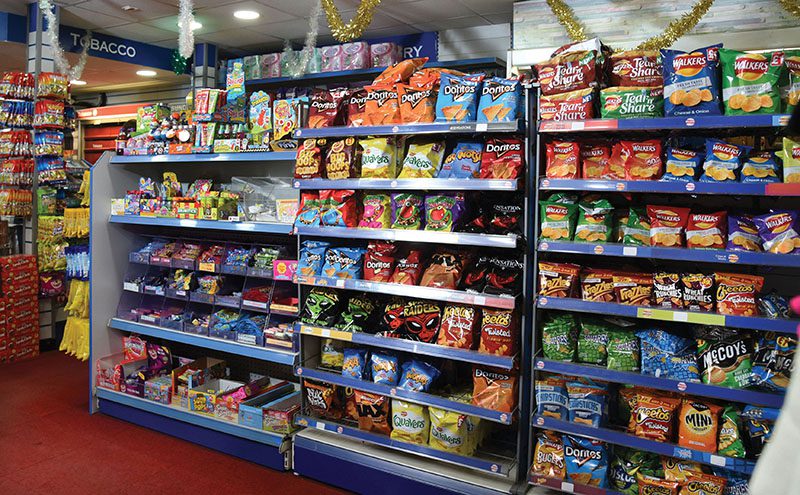 “Everyone complains about PayPoint, but you have to actually do something,” he said. “We got rid of ours in August. There’s no point just talking about it.
“The point about it is it’s a loss maker. We collected £81,000 for them last year. Our commission was only £963. And for every £100 in that £81,000 we’re charged 55p. As a retailer, you’re not making any money. You’re expected to make that back from the footfall, but that’s nonsense.”
Imran believes that to make the service fair for retailers, commission should be uncapped, banking the money should be free and charges for terminals, broadband and termination should be removed – an argument he has so far failed to win with PayPoint.
After missing two Direct Debit payments last year, Imran said PayPoint threatened to terminate his contract, so he let them.
“That’s what I tell people now. If you’re worried about breaking your contract, just miss a couple of Direct Debits and they’ll break it for you. It’s made no difference to our takings.”
Imran admits he might be feeling a bit braver than some retailers because he has one eye on the exit. Duns News Extra is currently on the market and he is hoping to start a new career as a private-hire taxi driver.
However, while he’s still in the convenience trade, he’s willing to do everything he can to help the CPG with its aims – and bringing  his gripes with PayPoint to the attention of parliament.
“I honestly don’t know what we might achieve,” he said. “It was a really good meeting. At least they’re listening. But we’ve got to get the point across that small businesses are being ignored.
“People aren’t willing to speak up. I’m more than happy to speak up, but then I’m leaving the trade. And I wouldn’t come back to it.”