With just over a year till the implementation of the UK government’s Soft Drinks Industry Levy, termed the ‘sugar tax’ by the media, soft drinks brands are already scrambling to reformulate and innovate. That’s likely to continue in the coming year.

THE ‘sugar tax’, the special levy that manufacturers will pay on sugar-containing soft drinks, is due to come into force in April 2018. Under the new rules soft drinks companies will pay a charge for drinks that contain added sugar and have a total sugar content of five grams or more per 100 millilitres. And there’s a higher charge for added-sugar soft drinks that contain eight grams or more per 100 millilitres. Pure fruit juices won’t be taxed as they don’t contain added sugar. And drinks with high milk content are exempted. It’s important to realise that the charge is levied on the soft drinks companies, it isn’t a consumer tax. So soft drinks companies will have to decide whether they raise prices to their immediate customers, and then wholesalers and retailers will have to decide if they will pass on any increases down the chain to consumers.
But we expect 2017 to see product development activity from soft drinks brands looking to mitigate the impact of the new levy.
Many companies have already reacted with new products and reformulations. AG Barr is one example, it launched its sugar-free Irn-Bru Xtra as well as Rubicon Light & Fruity – a juice drinks range with 50% less sugar – in August. The developments were in the pipeline but the process that saw the products come to market was accelerated.
Coca-Cola Enterprises has invested £30m across five years in reformulation and new product development, prioritising developments of lower and no-sugar drinks such as Coca-Cola Zero Sugar and Monster Energy Ultra.
Amy Burgess, trade communications manager at Coca-Cola European Partners said: “Since 2005, we have launched 27 new drinks with reduced sugar or calories and everything we sell has a lower or no-sugar option.”
Meanwhile, Vimto made its No Added Sugar portfolio the heart of a nationwide trade marketing initiative in 2016, including POS, in-depot displays, coupons at till point, and online advertising.
Ed Jones, Vimto’s customer and trade marketing manager, said: “We know that as many as 54%  of consumers are looking for low-sugar in their purchases, however no-added-sugar only accounts for 21%  of the soft drinks range stocked in impulse. This goes to show the scale of the opportunity, and we recommend that retailers and wholesalers stock up on Vimto No Added Sugar original and Vimto Remix to meet the growing demand.”
The British Soft Drinks Association claims its members have cut sugar in their products by 13.6% since 2012.
But the industry might have to do more.
According to research by Mintel, 53% of carbonated soft drink users say that they would either cut back on or stop drinking sugary carbonated soft drinks if the price were to increase by 24p per litre as a result of the sugar tax.
Rather than contest the legislation,  manufacturers will, Mintel predicts, downsize can and bottle sizes and reformulate to reduce or remove sugar.
Small soft drinks companies look to be excused the charge, so could we see some specialist and ‘traditional’ soft drinks providers spring up? 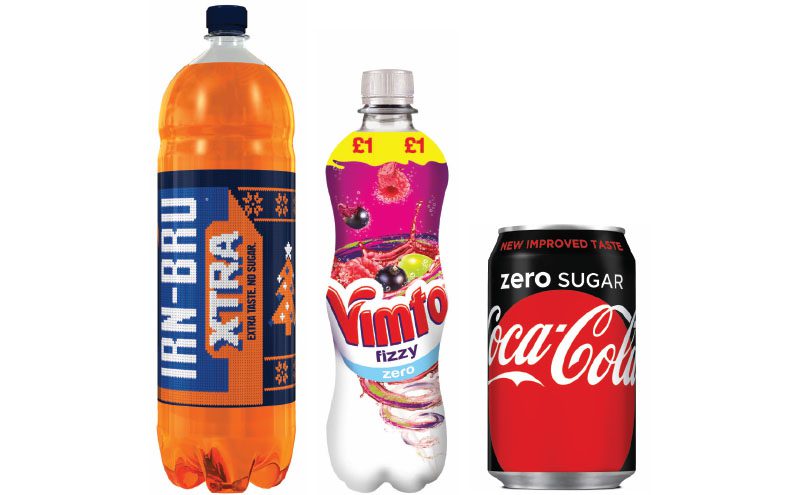 “With smaller producers exempt, this may provide opportunities for craft soft drinks producers to flourish – as Fritz-Kola and Ali Cola have done in Germany – albeit in a market without a soft drinks sugar tax,” the report said.
And it expects  100% fruit or milk-based drinks, which will not be affected by the levy, to become price competitive.
The Mintel report suggests not just the soft drinks industry should be concerned. It said: “Beyond the UK, more and more governments are concerned about obesity’s financial hit on public health services. Whilst they will be taking an interest in the levy’s effectiveness in health, more brands across Europe will consider this as a portent for a need to reformulate not just carbonated soft drinks but also other high-sugar products in other sectors.”
Some products have already been reformulated, such as breakfast cereals Frosties and Honey Monster Puffs, both of which saw their sugar content reduced in 2016, but Mintel suggests baked goods and confectionery could also come under pressure.
“The potential challenge for manufacturers of cakes, biscuits, sweets and ice cream would be far greater, because sugar is fundamental not just to taste but also to providing texture and bulk,” it said.
So 2017 may well see an unprecedented number of no and low-sugar variants launched across categories including soft drinks, confectionery, bakery and more.