Mo Razzaq’s store in High Blantyre was one of the first in Scotland to open under the Family Shopper fascia. The store recently underwent further development to incorporate a Post Office and Subway. So how are the new ventures doing?

THE definition of a ‘triple threat’ is someone in a particular field who exhibits three skills necessary to excel. In the theatre, for example, it’s someone who can sing and dance as well as act.

For owner Mo Razzaq, it all happened quite suddenly. Talks with Subway began in earnest in February and a plan was formalised to upgrade the store with a new kitchen and an additional sales counter.

Then the local sub-postmaster decided not to renew his contract and Mo was encouraged by customers to bring the Post Office under his roof.

Subway opened in July, with the Post Office following in August.

“I had a good think about the Post Office,” said Mo. “I wasn’t too sure. We were already putting the Subway in and knew we would be busy with that. I wanted the extra footfall and I knew I had the customers behind me, but I was worried about customer service. I don’t like queues building up. I think it annoys people and I didn’t know how to deal with the traffic flow. Eventually, we worked it out so there are three queues – one for Subway, one for the store and one for the Post Office.”

That also means three separate revenue streams to keep track of, with three sets of checks and balances.

“The biggest danger is losing track of everything. That’s when you lose money. I want to know, every day, where I stand. Our bread and butter is the Family Shopper. Subway gives a really good income, because of the margin. It will pay for itself within a year. That’s fantastic, but our bread and butter is still the store. That’s what we have to keep in mind.”

Since adding the Post Office and Subway Mo said footfall had increased by two thirds. That’s been driven, in part, by some creative promotions he has devised.

He offered discounts to school kids. In the week leading up to Remembrance Sunday veterans of the armed forces could buy a meal for £2.50. December, January and February will see special discounts for taxi drivers and council employees.

“We think outside of the box with things like that,” said Mo. “With the taxi drivers, there’s a benefit to us because if their passenger asks to stop somewhere to eat, the first place the driver will think of is us. We’ll also have a promotion on salads in January because people will be into healthy eating.”

This isn’t simple altruism. The aim behind every promotion is to encourage as many people into the store as possible.

“The more customers we get into Subway, the more people will shop in Family Shopper,” said Mo. “Some retailers just think about the money they’ll lose with a promotion, but the way I see it is I’m gaining more customers, which means my overall cash margin is going to go up.”

Shop sales have not increased as much as footfall, but Mo’s working on that, making adjustments to the range and bringing in new, unusual lines to attract attention.

“I’m acutely aware we’re not hitting all our customers properly. I watch where my customers are going and there are still those who come to use the Post Office but don’t buy anything in the shop. Those are the habits we need to break.”

The drinks area promotional end bay nearest the Post Office counter is used to display eye-catching products like Edinburgh Gin or speciality wines with a price tag of £18.99.

“It’s not what people expect from Family Shopper,” said Mo. “But we’re trying to hit a customer who’s never shopped here in their life. When you look at Lidl or Aldi, they’re known as cheap but they’ll offer the odd thing that’s quite pricey, because it’s different. We’re trying to tell people that we’re not what they expect. Come in and you’ll be constantly surprised by what we have to offer.”

In 2017, Mo is aiming to boost sales further by offering online shopping and delivery, as well as introducing beacon technology to his store. 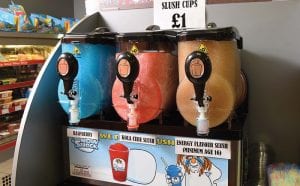 “At the start I was thinking of delivering Subway only, but the more I thought about it, the more it made sense to go for the whole package. It makes business sense. That’s the next thing.

“We’re also working with a company that wants to do direct marketing to the costumer with beacons at the door and throughout the shop. You can’t think day to day in this business. You’ve got to think 12 months ahead, and data and delivery is our focus for the next year.”

THE addition of a new Subway franchise at Family Shopper in Blantyre was made possible with the assistance of HH Retail Finance, which supported the business with a “vital” £55,000 finance facility, according to owner Mo Razzaq. 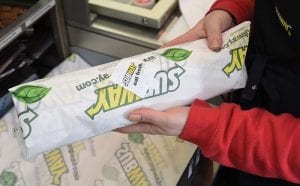 After deciding to upgrade the store with a new kitchen and an additional point of sales counter for Subway products, Mo again approached HH Retail for support.

“The finance provided by the HH Retail team was vital to our expansion as the cost of the refit would have required significant upfront investment,” he said. “We were delighted that we could complete the renovation in only eight weeks.”

Sarah Freeman, head of HH Retail Finance, said: “It’s been rewarding to help Mo and his team launch the store, and then to see the business grow from strength to strength.

“We look forward to supporting Family Shopper with opportunities in the future.”