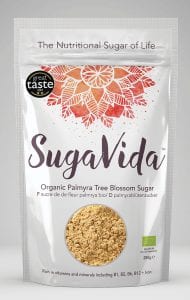 ONE company aiming to bring a sugar alternative into the mainstream in 2017 is SugaVida.
The UK’s exclusive supplier of organic Palmyra Jaggery (a crystallised, unrefined nectar alternative to sugar) SugaVida is re-launching with a new look  and positioning itself as a healthy sugar substitute to trust.
SugaVida can be added to tea, coffee, smoothies, protein shakes and water as a supplement.