HOLYROOD has given its backing to a proposal from the Scottish Grocers’ Federation and MSP Gordon MacDonald to establish the first-ever Scottish Parliament Cross Party Group (CPG) on Independent Convenience Stores.

For the past 12 months SGF has been working closely with Mr MacDonald – the SNP MSP for the Edinburgh Pentlands constituency – to get the group up and running and succeeded in holding an inaugural meeting last in parliament last month. The group then had to be officially approved by parliament itself.

Recognising the success of the first meeting, the Scottish Parliament Standards, Procedures and Public Appointments Committee has now fully endorsed and approved the establishment of the Cross Party Group on Independent Convenience Stores. 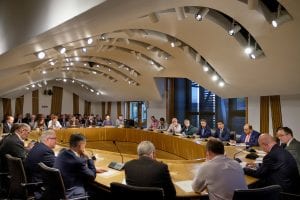 Gordon MacDonald MSP was appointed convenor with John Lee, head of public affairs at SGF being appointed to the group secretariat.

The SGF hailed the news as “an historic breakthrough” in its political engagement work.

Gordon MacDonald MSP commented: “Convenience stores are the corner stones of our communities. Scotland has more convenience stores per had of population than any other part of the UK and these stores provide over 41,000 jobs – it’s time this important sector in the Scottish economy got the recognition it deserves.”

This is the first time a retail-focused group has been set up within the Scottish Parliament. Its aim will be to provide a unique platform for MSPs to engage with retailers and stakeholders from across the supply chain on the key issues affecting the retail industry in Scotland. The group will now push forward with its next meeting, to be held in the Scottish Parliament on November 23.