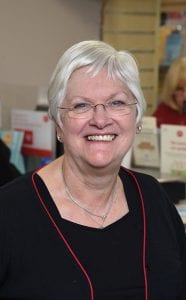 l Three years ago, Whitburn Post Office was converted into a main Post Office branch, offering a full range of products and services. The Post Office operates 8.30am to 5.30pm, but customers can also collect parcels outside of those hours.

l A Whitburn local, postmaster Teresa Hill was at university studying commerce when the town’s Post Office came on the market 29 years ago. Rather than complete her studies she decided to make an offer and jumped straight into running her own business. It’s a decision she does not regret.

An inspiring example of a post office branch not only moving with the times, but ahead of them, Whitburn Post Office has undergone an incredible evolution since Teresa Hill took it on almost 30 years ago.

“It was just a Post Office in those days. We had space for a few envelopes behind the counter and the rest was for queuing,” said Teresa.

“Every single day it was queued out the door with people wanting pension allowances. Everyone got their money through the Post Office and even with five of us on the counter you would start at 9am and wouldn’t see the clock till lunch. There was just no stopping.

“That’s how it was in those days. You didn’t sell anything. You didn’t have time to have conversations with anyone. It’s all changed now.”

Over three decades, Whitburn Post Office first expanded to incorporate a card and gift shop, then grew again when a Costcutter convenience store was added. And three years ago, the Post Office itself was converted into a Main style branch.

At every stage, the team has been ready and willing to meet the challenge. 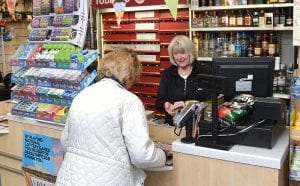 Making customers aware of the extensive range of services offered by the Post Office is the responsibility of Teresa and her colleagues, including customer relationship manager Dolina Thomson, who acts as a single point of contact for people interested in life insurance, broadband packages or a new mortgage.

“For those of us who started long ago, when you barely had time to say hello to customers, we’re really not used to it,” said Teresa. “Luckily Dolina and I will talk to anyone and we’ve been quite successful.

“Post Office Home Phone is a really good service and an awful lot of people have changed their home phone on the back of us starting a conversation with them.

“I wouldn’t say there’s competition between branches, but we are sent the data for others with customer relationship managers and you do get a wee bit competitive when you see what others have sold.”

It has taken time for Teresa and her team to develop sales skills, recognising when a customer at the counter might be interested in a new service and capitalising on that, but they have risen to the challenge, proving themselves enthusiastic and adaptable.

“I don’t think I miss the old days,” said Teresa. “I can remember when a special delivery had to be wrapped up with string and sealed with wax and I don’t miss that. The work changes, but it’s always had its challenges. You’ve just got to move on. We can’t survive on selling stamps, because who sends letters anymore?”

Seeing how the business was changing led Teresa to join Costcutter 10 years ago. Moving into convenience retail was a real culture shock, she said.

“We used to open at 9am and close at 5.30pm, open till 12.30pm on a Saturday and closed on Sundays. Now we’re in the shop at 5.45am and don’t close till 8pm. That was the biggest change – the opening hours and the number of staff we needed. 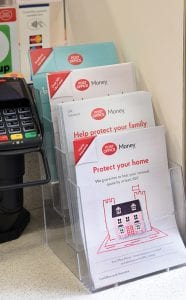 “At first, Costcutter was hard, hard work. We didn’t know how lucky we’d been. It’s a learning curve and you just get on with it, but it’s hard.”

“It’s very competitive,” said Teresa. “Everyone’s out for a piece of the same pie. We probably do quite well because we’ve got the Post Office. The two rely on each other.

“Having said that, when the Post Office has a Monday holiday the shop is not far off its normal takings. We have a lot of loyal customers who come because they know us and we have a good relationship with them.”

And loyal customers have been absolutely delighted by the store’s success at the Scottish Grocer Awards 2016.

“Our customers loved it,” said Teresa. “Especially the older ones. They really take it to heart. They feel it’s their award because it’s their Post Office. I don’t know the number of times we’ve had to take the trophy down and let customers hold it. It’s been an awfully good thing for us.”