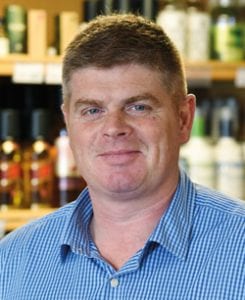 Licensed Retailer of the Year 2016 – sponsored by Whyte & Mackay

MITCHELLS, the long-established independent shop and tearoom in the Aberdeenshire town of Inverurie is independent by name and by nature. It chooses its own direction and has become well-known for local sourcing of excellent food.

And the winner of our 2016 title of Licensed Retailer of the Year certainly isn’t a standard licensed outlet. It doesn’t have a beer chiller and it closes at 5.30pm for starters.

But judges in the award, run in association with Whyte & Mackay, were looking more than anything else for a range of beer, wine and spirits that was precisely in tune with the store’s customers. And beyond that they were also keen to see a genuine interest in developments in the drinks market, good knowledge of products and their provenance, and a good understanding of seasonal and special opportunities.

And that all describes the drinks side of Mitchells.

The business, run by Patrick Mitchell and his daughter and son-in-law Judy and Keith Whyte, includes the store – which carries food, drinks, gifts and non-foods – and the tea room. Staying close both to customers and suppliers and offering things that are just a little bit different are all parts of its philosophy.

It’s in whisky country just along the road from the Glen Garioch distillery and a little to the east of the huge concentration of malt distilleries in Speyside. And whisky plays a major part in the shop’s beer, wines and spirits range. But it certainly isn’t just about whisky – especially not these days when there’s so much development in craft spirits, particularly gin, and in craft beers.

The famous Scottish spirit does get its fair share of space, however.

“The local whisky sells very well for us, the Glen Garioch and the Balvenie,” Keith said.

And Aberlour A’bunadh is a very good seller too.

He’s keen that customers see the shop as offering good value but at the same time he wants to charge what products, often high-quality carefully crafted spirts, are worth.

“If we are fortunate enough to get a really good multiple case price from a supplier we’ll pass it on as best we can.”

“I like to keep things fresh and flexible,” Keith explained. They will be recognised brands but something like Royal Lochnagar might not be there all the time. The fact that they can buy single bottles is a great help.

To date he’s chosen not to develop a wide vodka range but the store has responded enthusiastically to the rise of craft gin and has good business with the Rock Rose range, The Botanist, Blackwoods, Porters, Edinburgh Gin and others. 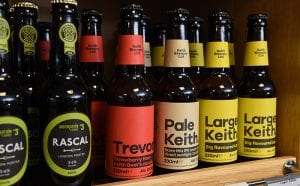 And he hasn’t ruled out the business making its own.

“That market’s perhaps a bit busy now,” he said. “But, in principle, why not? Never say never.”

Modern gin has certainly caught the imagination of some customers. In the summer he noticed that couples were buying combinations like Edinburgh Gin’s rhubarb gin along with Prosecco.

The shop’s craft beer range has grown considerably. Once again, in keeping with its local sourcing policy, Mitchells concentrates largely, though not exclusively, on local beers. Keith reckons Mitchells was one of the first retail outlets to stock Brewdog beers and now beers from nearby Keith and Lossiemouth do well.

The shop also carries Cairn O’Mohr fruit wines and even though Scotland doesn’t produce its own classic wines the store has high-quality New Zealand wine from a friend who emigrated. Local, premium soft drinks and mixers are also part of the range.

Local and craft drinks firms are invited to run tastings in the store.

And items from Mitchells’ very individualistic beer, wine and spirits portfolio also feature in its wide range of hampers, available not just at Christmas but at Fathers Day and, indeed, all year round.