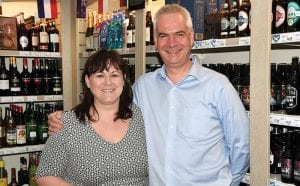 Beer Retailer of the Year 2016 – sponsored by Tennent’s

THIS year, Bruce and Donna Morgan celebrated their 10th anniversary as the owners of Best-one @ Brownlie’s of Biggar. The winner of Beer Retailer of the Year Award at the Scottish Grocer Awards 2016, Brownlie’s has come a long way since 2006.

“When we took it over, the shop did need a refit,” said Donna. “We started quite small, working on one bit at a time. It was only when Sainsbury’s announced they were coming that we decided to rip everything out and start again.

“We tried to make different areas within the shop and improve the feel of the alcohol area. Over the years we’ve built up our range. When we took over the shop we probably did a couple of shelves of bottled beers and we’ve increased that gradually over the years.” 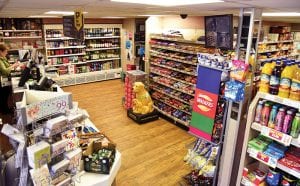 At just 950 sq ft, with an unusual, warren-like layout, space is a real issue for the store. Despite this, it can proudly boast one of the best ranges of beer of any c-store in the country.

A core range of big brands and popular sellers are supplied by the store’s symbol group Best-one, dual sited in the chiller and ambient areas. But a step into that ambient alcohol section also reveals upwards of 90 craft beers and traditional ales, most of them Scottish.

Bruce and Donna deal directly with brewers like Williams Brothers and Broughton as well as with a number of specialist suppliers including the Cress Company, Inverarity Morton and Gordon and Macphail.

“We have a lot of Scottish beers, a few English and some international beers as well,” said Bruce. “We’re quite limited for space, with the physical dimensions of the shop, so we’ve got to be selective. We can’t broaden our range without knocking something else off.

“At the end of the month we look at our sales figures to see the bottom sellers. If there’s only two or three bottles of something that’s not doing so well still left on the shelf I’ll just take them away with me and give them a good home. And we’ll put another product in that place to see how it goes.

Contrary to the stereotype, it isn’t just urbanite hipsters who are interested in craft beer. At Brownlie’s a broad mix of customers check out the shelves, searching through the bottles for something that captures their imagination.

“Customers like coming in here to find something different,” said Donna. “And we stock a lot of things because customers have specifically asked us for them. Because we’re independent we have the ability to do that.

“We do the same thing with beers as with all our categories in the store, really. We offer a standard range, but supplement it with things that they won’t have at Sainsbury’s, Co-op or Spar. That’s really important for us.

“We’ve had some that haven’t worked. You have to try. You have to keep it interesting. Customers will buy what they like, but if they see something new they might just pick it up to try it.”

Customers also get to try new beers – and other drinks – at the store’s regular tasting events, with the biggest, held in the run-up to Christmas, attracting upwards of 40 people.

Donna’s key piece of advice for retailers looking to improve their beer offering is a simple one.

“Speak to your customers. Everything we stock is down to our customers. I wouldn’t say go crazy. Build up from the popular ones that people will know and then you can become a bit more specialist. Our shop evolved from talking to people and getting to know them, finding out what they’re looking for,” she said.

“A lot of people will come in looking for something, but won’t necessarily ask if they can’t see it. If I see someone looking I’ll always ask if there’s something we’ve not got. People now know that they can come in and ask us for things. It’s so key that you get to know what your customers want and talk to them about it.

“In a lot of places our shop wouldn’t work, but wherever you are, with the kind of competition out there, you need to be able to make yourself stand out.”