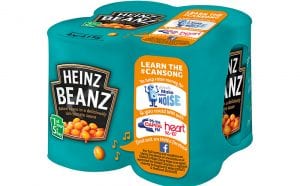 KRAFT Heinz is aiming to remind the nation of its love for Heinz Beanz with a £4m campaign celebrating moments when Heinz Beanz make things that bit better.

The company has teamed up with Global’s Heart and Capital to raise money for Global’s grant giving charity Make Some Noise (MSN), as it launches on-pack messaging and social media support.

Kraft Heinz has developed a 60 second TV ad, which hits screens during the first X Factor show of the year. The TV ad shows a wide variety of consumers enjoying Heinz Beanz, from a mum serving fish fingers and Beanz for tea to her children, to a group of builders enjoying a hearty Heinz Beanz breakfast. All these moments are tied together with one song – ‘The #CanSong’ – with the rhythm produced using a Heinz Beanz tin.

To support the ad, Kraft Heinz is launching a campaign accompanying the #CanSong Challenge and includes the strapline “Learn the #CanSong” across all media platforms. To inspire consumers to join the ‘#CanSong’, Heinz Beanz is launching a tutorial with animated illustration, which will be released as a fully-animated video on the Heinz Facebook Page. The tutorial includes a step-by-step guide on how to prepare your own tin, ready to join the ‘Can Song’ campaign.

Kraft Heinz has also teamed up with Global’s Heart and Capital to raise money for Global’s Make Some Noise helps young people living with disadvantage. The grant-giving charity gives a voice to small charities and projects across the UK that struggle to raise awareness. The Can Song Challenge encourages everyone to raise money by performing their own Can Song.

The Global partnership will kick off in the first week of September and will include a call to action from talents such as Heart’s Gethin Jones and Capital’s Dave Berry, George Shelley and Lilah Parsons.

The partnership is being reinforced with on-pack messaging, which includes a clear call to action on the top of Heinz Beanz 4 packs, 6 packs and Heinz Beanz 50% less Sugar. Available on more than 6 million packs, the communication drive is available to all retailers from September 5 until the end of October.

Francesca Mattiussi, senior brand manager for Heinz Beanz, said: “The decision behind this all-new and exciting 360 degree campaign is to celebrate the nation’s love for Heinz Beanz. We want to revel in the multitude of moments when Heinz Beanz make things that bit better.

“Beanz are loved by everyone from children to adults and by allowing consumers to get involved in a number of ways and showing them many recognisable moments where Beanz can be enjoyed we will remind them of their love whilst driving incremental sales for our customers.

“On top of this we are thrilled to support Global’s Make Some Noise, which is an exceptional organisation supporting charities for young people – making our job that bit more rewarding.”