Open since April, Tweed Road Stores in Galashiels is a new venture for forecourt retail company Adam Purves. Its refurbishment has packed a huge amount into a small space.

TWEED Road Stores in Galashiels closed down in November 2014 after serving residents in the south east of the town for 80 years. At the time, it seemed like there was little prospect of its doors ever opening again.

However, the store was reborn in April this year as a new venture for forecourt retail company Adam Purves Ltd. The development was spearheaded by forecourts manager Richard Garrie, who had been tasked with finding new opportunities for the firm.

“We don’t know where the fuel industry is going and about three years ago we started thinking about what else we can do that we’re good at, so we thought we’d go into convenience,” said Richard.

“We looked at Tweed Road back then, but at the time the Post Office was attached to it and we didn’t think it was viable for us to take it on as retailers. Then about 18 months ago I was passing by and saw the shop had closed down. So I spoke to the owners, got my directors down, we did the costings and decided to give it a shot.”

The plan hinged on Scottish Borders Council granting an alcohol licence, but the process proved surprisingly painless, with the application actually receiving letters of support from the locals. 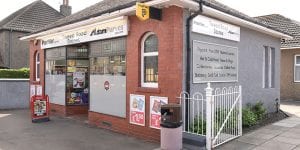 The hardest part, Richard said, was choosing a symbol group to go with. As well as a Mitsubishi dealership, Adam Purves has four petrol forecourts in the Borders, with shops supplied by Spar, Premier and Costcutter.

“We had them all round the table, but in the end we chose Booker because of the service they’ve provided to our branch here in Galashiels,” he said. “The support they gave us from start to finish was just terrific and that’s what we were after.”

However, though they were keen to have their support, one thing Adam Purves didn’t want was Premier’s distinctive purple and yellow signage above the door.

“As retailers, we’re very proud of our individuality,” said Richard. “We’ve been trading since 1879 and we didn’t want Premier’s branding because it would take the onus off of Adam Purves and put it onto them. I thought: as a resident, would I want to see Premier coming in or would I rather see the Adam Purves name?

What we’ve managed to achieve in such a small space is totally amazing. Everybody that comes in has commented.

“A lot of people don’t understand symbol stores. They think they’re company run and we didn’t want that. We wanted people to know that we’re individual, we’re different and unique.

“Booker fought us, but they were willing to try because we were so passionate about it. I think it’s better to have a mix of the two, and it has worked. Everything in the shop is Premier, but we’ve retained our individuality with the Adam Purves name.”

Once the deal was done, Richard set a goal to open in April, coinciding with the weekend of the Gala 7s rugby tournament. That meant shopfitter Vertex had a two-week deadline to work to. And although the exterior stayed mostly the same – all the way down to the original stained glass windows – the interior had to be completely remodelled.

At just over 400 sq ft, space is at a premium, but shrewd design has ensured every section is very carefully laid out and nothing is wasted.

That’s important due to the nature of the area. Customers range from students to elderly residents and everyone in between; with the nearest competitor a mile away Tweed Road Stores needs to offer a lot, and it does.

As well as alcohol and tobacco, hot food and coffee, news and confectionery, the store also has an extensive grocery and chilled range, most of it price-marked, with numerous items from local suppliers.

“What we’ve managed to achieve in such a small space is totally amazing,” said Richard. “Everybody that comes in has commented. There was a bit of fighting with Premier. They work to a spec that demanded three facings of this and four of that, but it just wouldn’t work. Doing it the way I’ve done it has made it possible to squeeze an extra 70 lines in. The only thing someone asked for that we don’t have, believe it or not, is paper plates.” 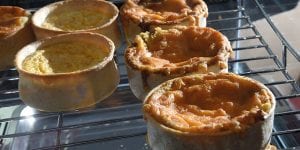 In the first two months of trading, the store has gone from strength to strength, said Richard.

“Every week the takings have gone up,” he said. “Our history is in petrol stations and I honestly had no idea what was going to happen when we opened our doors here. But when the very first customer immediately picked up a basket, I thought, ‘that’s a good sign!’”