CAPTAIN  Tiptoes – a snacks producer that says it’s from a  world “where seriously splendid snackage meets complete and utter buffoonery” – has launched a range of peanuts inspired by traditional crisp flavours. 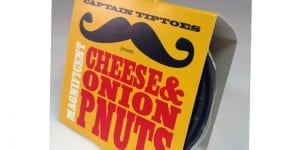 The new lines, which became available last month after the Farm Shop and Deli Show, are available in 51g individual-serve pots with peel-off tops and are gluten-free and suitable for  vegetarians.

They’re also said to be low in sugar and Captain Tiptoes argues the range offers a healthier and more satiating snack than potato crisps.