SPAR has revamped two significant sections of its own-label soft drinks range, which it says has sales worth more than £15m a year. The symbol group has refreshed its sparkling water range and revamped its Blue Bear energy drinks ahead of the summer.
Brand director Susan Darbyshire said: “As part of the relaunch, Blue Bear will have a brand new design to make it look and feel more modern.
“The Blue Bear range, which is worth over £2m, has been enhanced with two new flavours – Apple Sourz and Cherry Sourz.
“And the entire range will have a 10% reduction in sugar.”
Lemon and lime flavour has been added to Spar’s 1-litre water range.
Spar has also rebranded its American Cola as Classic Cola, and reduced its sugar content by 10%. 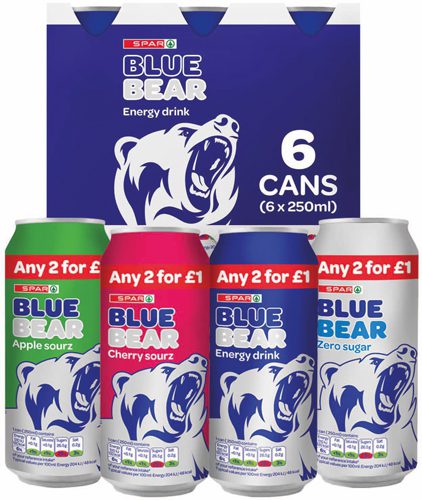