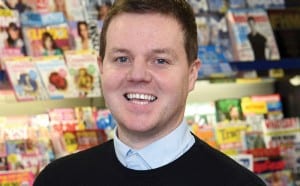 Store Manager of the Year 2015

Period at store to date: 19 years

Spar Thornliebank is a multiple award winner. In previous years it took Scottish Grocer awards for confectionery and merchandising. And it has just been named Symbol Store of the Year (for businesses with more than one store) for 2016.

The store has opened at 6am ever since plans were approved for a Tesco Express nearby. Gerry took the decision to match Tesco’s early opening hours in order to compete effectively. In the end, the proposed store never opened, but Spar Thornliebank still opens at 6am.

Competition in the area is substantial, especially at lunchtime. There are several other convenience stores and Gerry and team also compete with Subway, Greggs and McDonalds.

YOU might not think it to look at him, but Gerry Haughey has worked at Spar Thornliebank for almost two decades and has been store manager for nearly half that time.

A local lad, he worked his first shifts while he was still at school, eventually going full time and entering the company’s management programme. Nine years ago he took on the role of store manager and last year his consistently impressive efforts won him Scottish Grocer’s Store Manager of the Year Award 2015.

“I was delighted to win. It’s good for me, but it’s a good thing for the store and for the staff,” said Gerry.

“When I took the store over there were so many things I wanted to change. I wanted to freshen it up and stamp my authority on it, but it didn’t happen overnight. It took two years to get the store the way I wanted and to drill it into my guys that this is how we’re working.

“But once I did it my job became easier. It’s hard graft in the beginning. I can’t say the store runs itself, because that would be a lie, but I’ve got a great team behind me, I’ve brought them together, everything working the way I want and I’ve got a great relationship with the company.”

Though it’s part of the CJ Lang group, Gerry says he doesn’t run Spar Thornliebank like a “company store”. He runs it as he would his own business.

“Obviously the majority of our stores are planogrammed by head office,” he said. “But with the years of service I’ve got, if I see room for change I’ll phone the marketing and trading department and they’ll always let me change it. They will monitor sales just to see if it’s working, but anything I’ve asked for I’ve always had the go-ahead. Ultimately, I know my store better than someone at central office in Dundee and I know what my customers are looking for.”

Those customers run the gamut from school kids to tradesmen to local care home residents, but their demands are broadly the same – a clean, welcoming shopping environment, convenience and great value.

With so much competition around, that’s hardly a surprise.

“The competition in our area’s unbelievable,” said Gerry. “We’ve got Farmfoods, Costcutter, Nisa, two One–O-Ones. And obviously with the school kids we’re in the market for the lunchtime trade, and we’ve got a Greggs, a Subway, a chippy, McDonalds, and I’m trying to sell sandwiches at the same time. It’s a very hard market. Looking on it, I think it’d be easier going up against Tesco than all these small shops.

“My main aim is to keep a clean, fresh, friendly environment that keeps customers coming back. The last thing I want is for a customer to walk into my shop and get a bad feeling about it, because they will go elsewhere.

“But people do like it here. You find a lot of the older customers will spend 10 minutes in the shop and only walk out with a loaf of bread. Because it’s a clean, cosy place they’ll take their time walking around.”

When it comes to cleanliness and merchandising, Gerry holds his staff to an exacting standard, ensuring that the store always looks fresh, tidy and well laid out.

“People are amazed when I tell them we haven’t had any work done in the best part of seven years – not even a refresh of the graphics,” he said. “I just keep on top of it to make sure there’s no dirty roof tiles, no flickering light bulbs or anything like that. I will never go into a shop if I feel it’s dirty. I’m very, very tight with my cleaning schedule, stock rotation and planograms.

“I keep on top of it by having a solid unit of staff and making sure they’re all fully trained and working my way. It helps having such a good, close-knit team who’ve been with me for so many years. People think it’s quite a big store to have only 11 members of staff, but I’m fine with what I’ve got. We work well as a team.”

So just how have things changed in the last 19 years?

“Things are getting tougher, especially with the new licensing laws,” said Gerry. “If your training’s not up to date or your staff aren’t at a level where they know all the rights and wrongs there can be massive consequences.

“As for the job itself? Obviously, every year we’re trying to cut back on costs and make bottom line. That’s tough, but I like to see that as a challenge. It’s the kind of thing that just makes me work harder.”