FORMER Coca Cola chief Chris Banks has launched an apple drink through new company Newton’s. He reckons apple fizzics will appeal to consumers who are conscious of sugar levels. 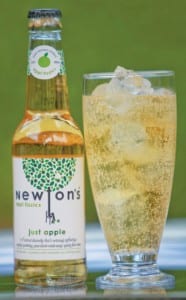 Banks said: “Juice and juice drinks have been a key theme in the mainstream drinks sector principally due to the sugar content and its impact on the well-being of children and adults alike.

“Newton’s appl fizzics has launched at a timely moment.”

The company takes its name from Sir Isaac Newton who, allegedly, developed theories on gravity after seeing an apple fall.

“The drink contains pure apple juice and sparkling water and has no artificial ingredients, preservatives or added sugar.”