FOOD-TO-GO is big, right? So specialist sandwich shops and other specific food-to-go outlets should be grabbing a major share of sales.

Well HIM Research and Consulting reckons consumers often want more than just a grab-and-go midday meal and as a result they are increasingly using c-stores when they want to buy food to go.

HIM marketing executive Ruth Cousins said:  “Last year the food-to-go mission in convenience was worth £4.8bn, we predict sizeable growth to £7.8bn by 2020. 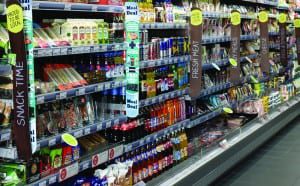 Food to go and quick-cook snack products play an important role in the Costcutter store in Kelty, Fife. HIM Research found that many consumers see c-stores as an ideal place to pick up lunch, snacks and on-the-go foods at the same time as carrying out other shopping.

26% of food-to-go shoppers that HIM had spoken to said range is the most important factor when choosing where to shop, she added.

“In theory it makes perfect sense for convenience stores to expand their food-to-go offering.”

The company’s insight manager Louise Howarth explained that shoppers said a key reason for choosing that particular store was being able to get everything they need there and said: “When you look at people who are on a food-to-go mission in c-stores, the majority are using it as a convenience store as well.”

• Not only are consumers eating more food-to-go products, they are also spending more on their purchases according to John Want, UK head of marketing at Adelie Foods.

A report commissioned by Adelie revealed that 44% of those surveyed bought food to go every week and that 34% buy items two or three times a week.

And it showed that on average people are spending £3.81 per visit, an increase of 23p on the previous year.

Want said: “This represents a year-on-year increase of 6.4% which is a substantial increase against a backdrop of zero food inflation.”

He added that meal deals affect buying decisions with 43% of consumers deciding based on variety on offer within the deal and that more people are making decisions in-store.

He continued: “There are some interesting variances between age, location and gender, with 25 to 44 year olds more likely to be buying food-to-go products four or more times a week. Males are more likely to buy that frequently.”