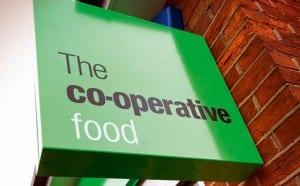 THE Co-operative Food emerged as the fastest-growing non-discounter in food and drink retail in the 12 weeks to the end of January in the latest analysis by researcher Kantar Worldpanel.
In the period, which covered both the Christmas season and the post-Christmas weeks, the Co-op’s sales increased to £1.62bn which was 1.4% up on the previous year at a time when the overall market was up by only 0.2%.
Of the big four multiples only Sainsbury’s showed growth, up 0.6%.
Asda’s apparent slump continued, it was down 3.6%, Morrisons slipped by 2.2%, and Tesco dropped 1.6%.
Kantar Worldpanel also found that symbols and independents had dropped 0.8% compared to the same period the previous year.
But the discounters continued to show sales growth that dwarfed the other players.
And once again it was Lidl who grew most, up 18.7% to take an overall market share of 4.2% .
Aldi was up 13.7% to reach a market share of 5.6%.
• Nielsen Research shows similar trends but didn’t see Co-operative as quite so strong, at 0.8%. And  it recorded Aldi  as growing faster than Lidl at 18.7% versus 17.2%.