• Owner Iky Ahmed is a member of Whitecrook Community Council.
• The shop is an active participant in various community activities. It supports the local after-school club and puts on an in-store celebration for youngsters at Halloween. It also holds a collection for the food bank at Christmas.
• Beyond collectables, news, cigarettes, confectionery and off-sales, Fleming Gifts, as its name would suggest, offers an incredible range of gift items, including candles, artwork, novelties, games and toys.

TAKE a glance in any direction in Fleming Gifts in Clydebank and you’ll most likely see trading cards.
Described by judges as an “Aladdin’s cave of collectables” it’s not difficult to see why the store won Scottish Grocer’s Collectables Retailer of the Year Award for 2015.
With Our Holy Redeemer Primary School just along the road, the store receives a steady stream of young customers and caters to their interests, especially trading cards, which are clearly displayed and promoted throughout.
Owner Gulzar ‘Iky’ Ahmed has long been dedicated to selling collectables, feeding off of his own childhood passion.
“I’ve always loved trading cards,” he said. “When I was a child I had all the old albums. I know that it’s a great thing for kids and I want to encourage it, especially since there’s so much variety now. When I was young football stickers were all you could get – and only Scottish and English. Now there’s Minions, Frozen, Star Wars, all sorts.
“Obviously, some ones don’t really sell but it’s worth taking a punt. You need to speculate to accumulate, as the saying goes, but they’re all sale or return, so where’s the risk?”
For many local children, the obsession with trading cards begins in Fleming Gifts, which is fully equipped to generate and cultivate interest. Starter packs are prominently displayed along the counter, while Iky makes great use of promotional packs provided by Topps.
When a group of two or more youngsters are in the shop, he’ll distribute the free packs among them, knowing this will spark interest and return visits.
“The football ones are fantastically popular, but so is wrestling,” he said. “It’s very, very popular here and when kids are buying wrestling cards and wrestling albums, they’ll also want to buy wrestling books, figurines, belts, all of which I have. By stocking all the different varieties and add-ons you can really capture the market.
“Some kids will come from the other side of Clydebank to come here because they know we’re going to have the cards. That’s great for me, but I don’t understand why some stores don’t bother with collectables now. It’s a great business for kids and they’re your future customers.
“I had kids shopping here in 1989 who are now grown with children of their own, and they’re coming in to buy cards.”
It’s fair to say the store hasn’t changed a lot in the last 27 years, though Iky has thought about updating it.
“I’ve had the glass counter since 1989 and I’d like to make it more open plan, but I’m worried in case it doesn’t work out,” he said. “It’s a character shop. You don’t see a lot like it now. Everything’s all low ceilings and bright lights. For me, this shop has always worked out. We are successful, so what’s the point of changing?” 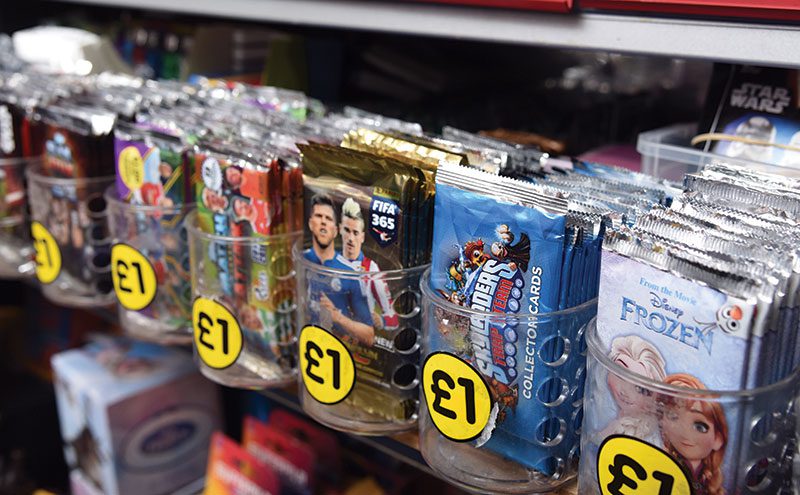