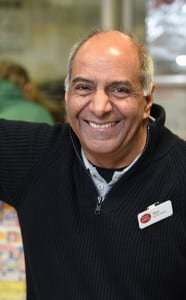 Clydebank Post Office is a family business, run by Sham along with his wife and their son and daughter, Ryan and Natalie (who he describes as the “key players”).

The family launched a second post office, The Penny Black, in the west end of Glasgow, in 2014, also praised for its innovation.  Negotiations to secure a third site are ongoing.

Post Office transactions are dealt with across eight counters in the Post Office. Three are at the secure fortress, two are ‘open plan’, better for discussing financial services, and three combi counters are at the front of the shop. 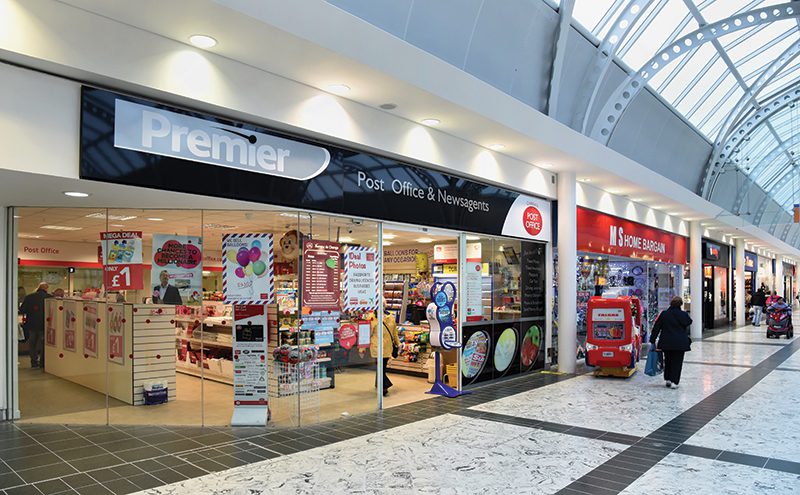 Clydebank Post Offi ce is situated within the Clyde Shopping Centre, the heart of retailing within the town. The location ensures a steady stream of passing trade throughout the day.

O say that Clydebank Post Office has come a long way in the years since Sham Marwaha took over would be something of an understatement. It’s not even in the same part of town.
When Sham and family purchased the business in 2010, the Post Office was situated at the back of Clydebank Co-op’s department store, and it was struggling.
“Because we were in the Co-op, we couldn’t have our own shop,” said Sham. “Post offices can’t survive now without having a retail side. They just can’t.
“In January of 2013 we moved into the unit in Clyde Shopping Centre, which allows us to have a retail offering, which means the Post Office can survive. Without it, there’d be no Post Office, as simple as that.” 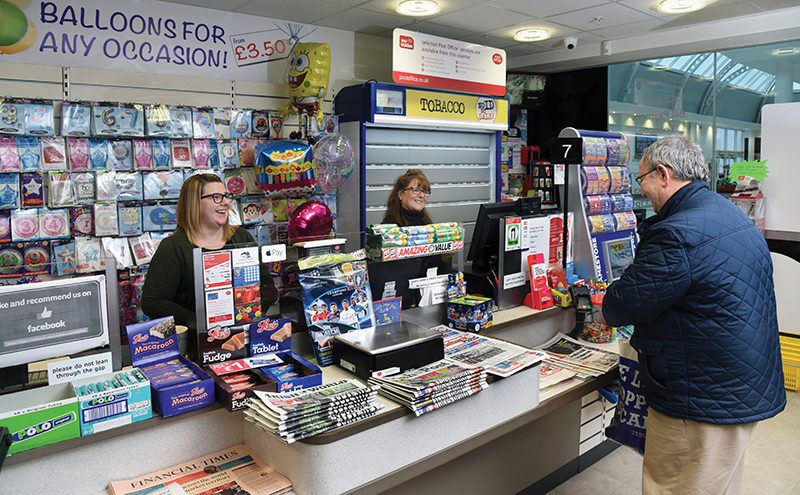 There’s a mix of long-serving and fairly new staff: they are all trained to a high standard, interact well with customers and are comfortable selling a full range of Post Office products (whether a stamp or a mortgage).

The existing store, which combines a full Post Office with Premier convenience offering, had to be built from scratch, requiring a large investment and a lot of hard work.
That all seems to have paid off with a healthy income and industry recognition in the form of Scottish Grocer’s Post Office Retailer of the Year Award 2015.
Judges praised Clydebank Post Office for its customer service and innovation, exemplified by its industry-leading approach to the sale of financial services.
“Post offices generally are providing more services than they ever used to,” said Sham. “ You can come in here to buy a stamp or you can buy a mortgage. You can buy car insurance or life insurance. Our staff are very versatile, they really do everything. 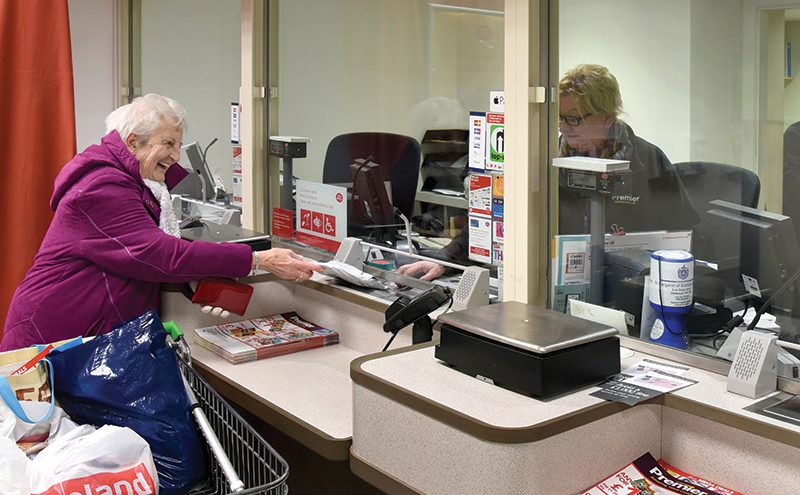 “People generally don’t come into a Post Office thinking about mortgages. We have to bring it to their attention, make them interested, remember who we spoke to and remind them a month later. It takes time, but it’s all down to the interaction we have with the customers. In that respect we’ve brought our retail skills to the Post Office.
“To give an example, the Post Office provides a phone service, like BT or Virgin Media, but people don’t know about it. In the space of three years we’ve brought it to the attention of our customers, shown them how they can save money on their bills and I would say about 80% have switched.”
This simply wouldn’t have been possible in the old premises, says Sham.
“It’s very hard to do when you’re talking through glass. And the old post office didn’t even have a loudspeaker system so we were literally shouting at the customers and they were shouting back. 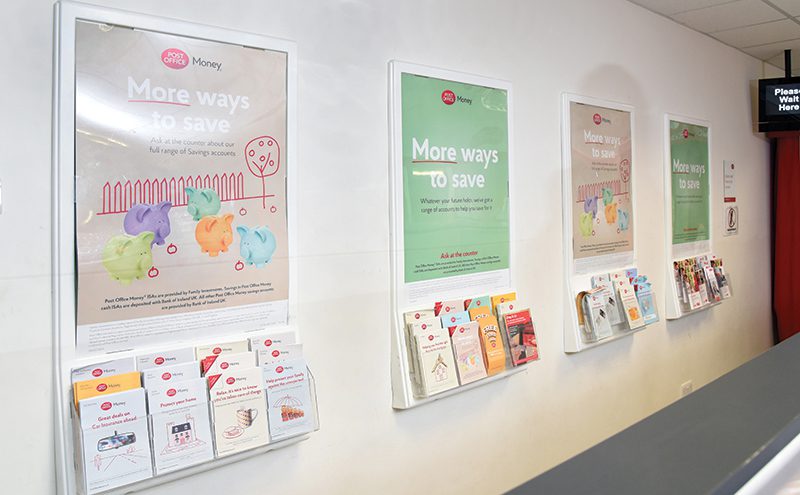 They have helped make Clydebank Post Office of the most successful Post Offices in the UK for sales of financial services.

“As you can imagine, it was very difficult, whereas now we’ve got open-plan counters so you can talk to customers without barriers. And even in the fortress we have two-way speakers, so it’s much better.”
With such a range of products and services on offer, staff training is, in Sham’s words “vital and constant”.
“It’s about developing people. Several of our staff have been with the Post Office long enough to remember when it was just about mailing parcels and selling stamps, but that’s not how Post Offices are going to survive. We’ve had to provide them with the training and the confidence so that when someone comes in to buy a stamp they will talk about a phone line or life insurance.
“We’ve trained them how to operate on the grocery side, which was new to them. We’ve taken on younger staff, neither of whom had training in Post Office or grocery retail when they joined and we taught them the skills in both areas.
“The staff are very personable. They know the customers on first name terms, they go to church or chapel with them, and they’re able to provide a very friendly, personal service. That spills over into the retail side and gives us an advantage over a supermarket.” 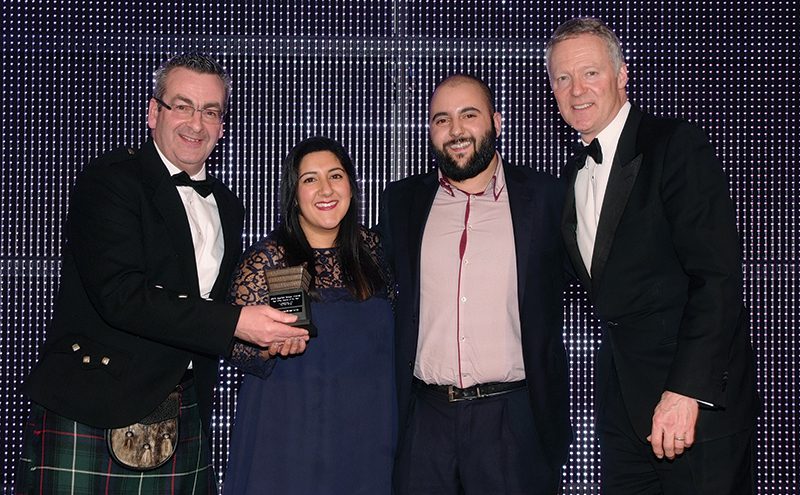 As well as crediting his staff, Sham says the store owes much of its success to his children, Ryan and Natalie.
“They’re both very committed and full of enthusiasm. I do my best, but they’re taking the business forward. In five years we’ve gone from not having any shop of our own to having two very successful units and hopefully, in the next few months,  a third.”