Soft drinks are bought more frequently than products in any other category during the festive season says Coca-Cola Enterprises quoting Kantar Worldpanel research.
Trade communications manager Amy Burgess said: “With 8.4 soft drink purchases per shopper in the run-up to Christmas, the most important thing for retailers is to be prepared for this spike in popularity by getting their product ranges right, to make the most of the 95% of households enjoying soft drinks.”
To encourage Christmas sales of the Coke range, the pre-festive-season Coca-Cola Holidays are Coming ad is back on TV, there is also an on-pack festive competition and the Coca-Cola Christmas truck is visiting towns across Great Britain.
• Adult soft drinks shouldn’t be forgotten at Christmas, says Britvic. 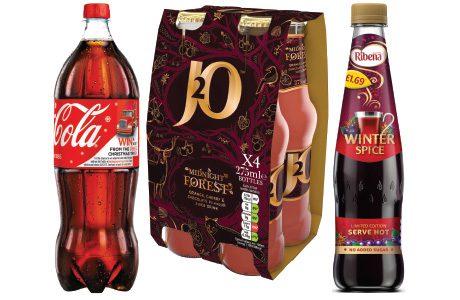 Nigel Paine, one of the firm’s GB commercial directors said: “To target those socialising with friends but choosing not to drink alcohol, J2O comes in a range of core flavours and has recently launched a limited-edition Midnight Forest variant for the festive season.”
• Energy drink Boost has introduced a special edition for winter.
Winter Spice is available in 49p price-marked 250ml cans, in cases of 24.
• Ribena has introduced a new variety, also called Winter Spice, that’s designed to be warmed before consumption.
Marketing manager Jo Padwick said: “We have developed Winter Spice as a non-alcoholic mulled wine option, as well as being an alternative to tea and coffee.”
It is available in a 600ml £1.69 PMP bottle and in an 850ml bottle with an rrp of £2.49.