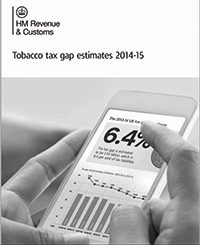 CRIMINALS using illicit methods and networks may have sold 4bn cigarettes in the UK in the year 2014-15. The figure (HMRC’s central estimate in a range that runs from 2bn to 6bn) is no lower than the previous year. So the tax collecting body reckons rogue cigarettes maintained sales and distribution despite a major campaign to disrupt tobacco smuggling and despite a decline in legitimate cigarette sales (from 35bn sticks to 33bn) that it puts down to fewer people smoking.
However HMRC estimates that considerably less illicit roll-your-own tobacco was sold in 2014/15. Its central estimate for the period was 3,700kg compared to 4,400 kg the previous year.
It means, the department’s latest edition of Tobacco Tax Gap Estimates says, that revenue lost to the exchequer as a result of illicit tobacco sales remained at £2.1bn – the highest figure since 2008-09.
Cross-border shopping, which includes duty-paid cigarettes bought in lower tax countries in the European Union as well as duty-free purchases, cost the exchequer £1.5bn.
The central estimate of the share of the total tobacco market taken by illicit trade remains at 10%.