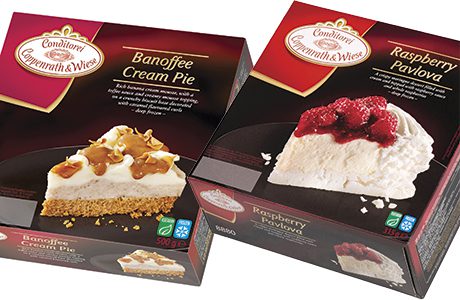 FAMILY Christmas meals take a lot of planning and preparation and cooking and serving can take up a large part of the big day for the family member who serves them up. Coppenrath and Wiese says one way to lighten the load is to use a frozen dessert.
The company’s Lisa Bahre said: “Frozen desserts are an essential category during the festive season.
“A frozen product gives the consumer the option of buying in advance of a Christmas gathering that may be a few days or weeks away.”
Bahre said that in the convenience sector frozen dessert sales have grown 3.1% year on year thanks to more frequent purchasing by consumers.
“Coppenrath and Wiese is introducing special lines to tempt the customer at Christmas, such as the new Banoffee Cream Pie,” she said
“Pavlovas offer an enjoyable alternative to the traditional Cheesecakes and Gateaux. A C&W Raspberry Pavlova is therefore a perfect supplement to any Christmas range.”

• Ben & Jerry’s has reintroduced its Minter Wonderland festive flavour and added Cinnamon Buns to its seasonal ice cream line-up.
Brand manager Alessandra Salvo said: “We’re excited to be bringing these flavours to our fans – cinnamon is an extremely popular flavour during winter months and Minter Wonderland was such a huge hit last year.”
Salvo added that last year’s launch of Minter Wonderland and Joy to the Swirled brought an extra 121,000 new shoppers to the ice cream category and that Minter Wonderland was the number-one new ice cream product from October 2014 to February 2015.