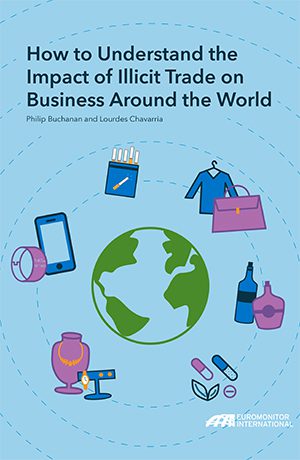 Market research company Euromonitor International has released what it calls a new white paper – How to Understand the Impact of Illicit Trade on Business Around the World.

Globally, the analyst says, an increasing number of goods and brands are affected by illicit trade, from consumer products like electronics, clothing, pharmaceuticals and alcoholic drinks to other industries such as vehicle lubricants and parts.

It says the global value of illicit trade and transnational activities is between 8% and 15% of global GDP, according to the World Economic Forum. That means it could have been as high as US$12 trillion in 2014 (roughly £8 trillion) approximately the size of China’s total economic output in that year.

According to Euromonitor International, in 2013 the volume of illicit cigarettes consumed in the world was approximately 570bn sticks with an estimated value of US$39bn (approximately £26bn), which was nearly identical to the value of revenues not collected in taxes if the products were sold in the legitimate market.