Directed by Ridley Scott, the film stars Matt Damon as astronaut Mark Watney who, stranded alone on Mars, must sustain himself by growing a field of potatoes. 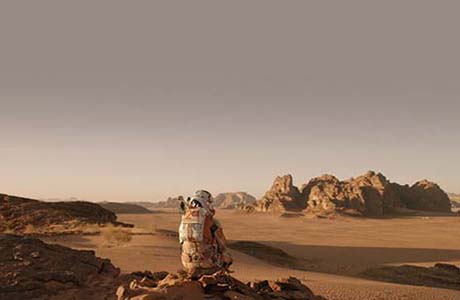 Albert Bartlett and its ad agency HHM have created a press campaign and competition, which launched on 16/17 September 2015 and will run in national newspapers through to end of October supporting the cinema release on 30 September. Through the ad campaign, readers will be given the chance to enter a competition to win a 4-day trip to Kennedy Space Center Visitor Complex in Orlando, Florida for a family of four. Albert Bartlett will include £2,000 spending money for the winning family.

Albert Bartlett will release a promotional press campaign running until end of November featuring national press ads and on pack stickers for over a million bags of potatoes.

During the making of ‘The Martian’, NASA announced that three American astronauts had sampled red romaine lettuce grown on board the International Space Station, demonstrating that sustainable supplies of fresh potatoes and other vegetables can be grown in micro-gravity inside the in-orbit plant growth facility.

“We always knew our customers were intelligent people, so it’s great to see that is now backed up by science,” said Michael Jarvis, head of marketing at Albert Bartlett. “Our famous Rooster potatoes are red skinned and a healthy food, so the link with a lone astronaut surviving on potatoes on the red planet was too strong to miss. Luckily, our potatoes are easier to obtain than they were for Mark Watney – you can buy them in most supermarkets across the UK.”