SKITTLES and Starburst brand owner Wrigley says people continue to spend less time and money on evenings out and instead stay at home for a big night in. Its own independent research found 47% of consumers are spending less money on out-of-home entertainment and 50% are eating out less than before.
It sees gaming as playing an important role in the big night in and Skittles has teamed up with Xbox in on-pack activity that gives consumers the chance to win an Xbox One with every sold from early June until the end of the year.
It sees value as linked to the big night in and the £1 price point as attractive to consumers. It has extended its range of price-marked packs on Skittles and Starburst, with the introduction of four additional hanging bags with a £1 RRP price flash. 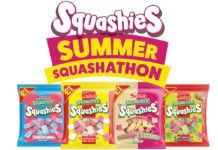 Prizes on offer in summer push