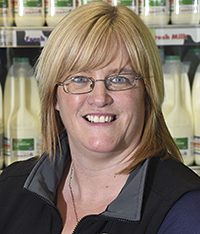 • Angela has been the manager of Spar Dalrymple since it opened just over four years ago. Before that she was assistant manager at Spar in Boswell Park, Ayr.
• In the first years, Spar Dalrymple faced competition from a Premier store around the corner –until CJ Lang bought it. The nearest supermarkets are around five miles away.
• The Post Office was integrated in February 2014 and has progressed well. The store also operates a mobile Post Office service, with a van servicing villages like Ranskinston, Minishant, Kirkmichael and Colmonell – 28 miles away.
• The store also offers an in-store bakery, coffee, hot dogs and a good off-licence range.

Cream of the crop

A rural location can be a benefit to a convenience store. Away from the competition of supermarkets, pound shops and discount chains of the city, a store can corner the market and almost guarantee itself a steady stream of customers. But that’s no reason to let standards slip.
Opened four years ago, Spar Dalrymple is currently the only shop in the village and relied upon by many people in the local community and smaller villages dotted around East and South Ayrshire.
For this reason, the store is, according to manager Angela Pattie, “busier than a 24-hour shop” and she and her team work hard to make sure shelves are always well-stocked and looking smart. As a result, the store has seen continued growth over the last few years.
Many customers expect to complete a full shop, which the store caters to well, with larger pack sizes, fresh daily delivered fruit and veg, a wide range of ‘tonight’s tea’ products, butcher meat and lunchtime foods. But it also pays close attention to the daily essentials – especially milk.
Spar Dalrymple took the Dairy Award (Milk), sponsored by Müller Wiseman Dairies, at the 2015 Scottish Grocer Awards – the second time it has been awarded for the standard of its milk in four years.
When it opened in August 2011, special emphasis was placed on the store’s fresh and chilled range, including milk. It’s a style of retail that has since been rolled out to many other Spar stores.
On entering, rather than being met with confectionery, crisps or soft drinks, customers are met with an aisle of chilled and fresh food. At the end of it, facing the entrance and visible even from the street outside, is the milk fixture.
The fixture itself is clean and well-merchandised, with a range that closely reflects local consumer preference. A recent addition is Puriti, fresh milk with a longer shelf-life from Müller Wiseman, which is proving popular with customers.

An offer of ‘Any 2 for £2.50’ on 2L bottles of own-brand milk has been in place for several years and brings in reliable sales, while The One (£1.19 for 2L) is also a good seller.
Systems are in place for staff to regularly check displays and maintain availability of milk throughout the day. The store also offers a ‘milk guarantee’, whereby customers are assured that if they come in looking for a bottle of milk and can’t buy one, they’ll get the next one free. It’s a guarantee the store has never had to redeem, because it’s never run out – a fact Angela is especially proud of.
“We’ve got our orders down to a fine art now,” she said. “We get deliveries three times a week so chilled is always fresh. And we’re getting it in and selling out just as the next order arrives, so wastage is very low.”
And after introducing the Post Office, the store is now making deliveries of its own via a mobile Post Office van, servicing villages like Kirkmichael, Colmonell, Minishant and Rankinston.
“Ranskinston has some very elderly people,” said Angela. “There’s no shops at all in the village. The nearest is 10 or 15 miles away, so we go out there once a week and supply groceries to them. They can phone up if there’s anything particular, but we have a standard range we carry.
“We invested £1,500 in chill boxes so not only can we offer bread and groceries, but also fresh milk, cooked meats, bacon and sausages.
“That means they can still enjoy a full Scottish breakfast on a Sunday morning.”