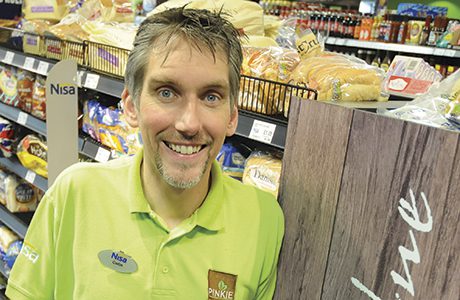 • Colin was doubly successful at this year’s Scottish Grocer Awards, being named Entrepreneur of the Year for his development of the Pinkie Farm project.
• Musselburgh is known as the ‘honest toun’ and this partly inspired the Pinkie Farm slogan ‘Honest Local Value’.
• Investment continues at the store, which recently opened its own bakery and introduced contactless card terminals.
• POS highlights products from local suppliers, many of whom supplied the old farm shop.

IT’S fair to say that Nisa Local Pinkie Farm is a long way from what anyone might picture when asked to think of a typical symbol store. That’s also one of the qualities that makes it such a deserving winner of Scottish Grocer’s Symbol Store of the Year (single-store) 2015.
Built to replace the old Pinkie Farm store, which had traded for over 50 years, the ambitious development was a labour of love for owner and manager Colin Smith, who collaborated with former Bellevue Cash & Carry owner Graham Benson and convenience store stalwart David Sands to create something truly special.
“The focus of the business was to try and get back to the roots of the old store, which developed from a farm shop,” said Colin. “We wanted to try to bring in as much fresh, local fruit and veg as we can, which isn’t easy when there really aren’t that many local producers left.”
Colin, former regional manager for Bestway Direct in Scotland, was able to retain all of the old store’s local suppliers and has even brought in a few new ones, with strips highlighting local produce on shelf.
However, while Pinkie Farm retains and highlights the heritage of the old farm shop, it is also a truly modern symbol store in terms of range, service and style.
The store has 18 metres of chilled which means it can show off Nisa’s own range of chilled products in a way that few stores can.

“There’s no other symbol group out there that can supply the sheer variety of chilled food that we take. I know that from my own background. The whole range recently went through a redesign and the packaging is fantastic,” said Colin. “You see the result in the uplift of sales. We used to only sell half a dozen ready meals but now we’ve got the full range.
“What I have found is that a lot of traditional convenience store’s traditional grocery sales are in decline. We’re actually very strong on it, maybe because of our size and the fact we’ve got a full offering. Our main strengths are fresh and food to go, but traditional grocery is strong for us, which is pleasing because there’s margin in it and it means people are using us for a full shop rather than to top up on bread, milk and tobacco.”
A high footfall store, Pinkie Farm typically serves 1,250 people a day. And with around 500 new homes being built across from the car park, it is well placed to build on those numbers in the future.
Colin hopes to achieve this by continuing community engagement through the local primary school and the store’s Facebook page. But he also recognises that there is no better way to win over customers than by continually improving the actual experience within the store.
Recent developments down at Pinkie Farm include the addition of an in-store bakery and contactless card terminals, both in their own way helping to further the aim of making the shop a real community convenience store.
“It’s about keeping up with technology and keep trying to improve your offer,” said Colin. “You’ve got to keep an eye on the future and keep thinking about your business.”