‘Not the right solution’ to our litter problem?

A proposal to recycle drinks containers through Scottish retail outlets has come in for further criticism this month, with warnings it could hit the poorest consumers hard, disadvantage c-stores and even spoil ongoing environmental efforts.

Under the deposit return system, which the Scottish Government’s environment secretary, Richard Lochhead has said could be the “next big thing”, a customer would pay a deposit of 10-20p on every drink they purchased (including bottles, cans and cartons). Once it was finished, they would be able to return the ‘empty’ to the shop and get their deposit back.

It would be the retailer’s responsibility to store empty containers for collection, with a ‘handling fee’ paid to them by way of compensation for any inconvenience. Alternatively, retailers could choose to install ‘reverse vending machines’ in their stores, at a cost of around £32,000 per unit.

Proponents believe the scheme would dissuade people from littering and help to boost recycling, with an anticipated return rate of 85-95%.

However, retailers, wholesalers and at least one environmental charity appear thoroughly unconvinced.

Responding to a call for evidence following the publication of a feasibility study by Zero Waste Scotland, which was requested by the Scottish Government, the Scottish Wholesale Association and the Federation of Wholesale Distributors said: “We do not believe that the proposed DRS will achieve the levels of returned containers assumed by supporters of this proposal. 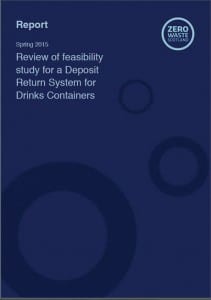 “Our members believe this proposal would inconvenience customers and hit the poorest consumers hardest.”

Their response also echoes the concerns of the SGF, ACS and assorted retailers who have been made aware of the proposal.

SGF chief executive Pete Cheema said a DRS, if introduced, would unfairly benefit supermarkets, with more storage space and money to invest in RVS making them a more attractive option for consumers.

“It is certainly the most worrying piece of potential legislation facing us at the moment and it seems at this moment in time that Richard Lochhead is determined to push it through,” he said. “If this was introduced, just consider the inflationary impact it would have on the economy. The cost implications, in times of austerity, would certainly not help either. Most importantly it would drive footfall away from the independent sector to the multiple sector.”

Criticism of the scheme has also come from environmental group Keep Scotland Beautiful, which said: “The scale of the investment required and the lack of evidence that it would deliver any significant reduction in litter, means it is not the right solution to the litter problem in Scotland at this time.

“A DRS could become an unhelpful distraction, diverting focus and scarce resources away from the work required to deliver the National Litter Strategy which has only been in place since June 2014.”