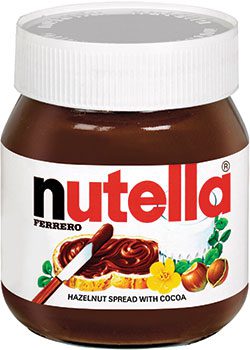 NUTELLA brand owner Ferrero says the market-leading hazelnut spread has seen impressive volume sales growth in the last year. The firm reckons that’s largely down to Nutella’s versatility, which has put it in a good position to respond to consumer demand for something new, especially at breakfast – a meal that increasing numbers of people are taking at home.
It’s the biggest-selling hazelnut spread with cocoa but Nutella also has three variants in the top six performing SKUs (400g, 200g and 750g) among spreads in general.
Ferrero reckons that, with a variety of sizes to choose from, Nutella’s range successfully caters for different sizes of family and a variety of consumer uses. Currently 74% of Nutella consumption is as part of breakfast but it is also popular as a snack and for special events like Pancake Day.
Nutella has the highest media spend in the spreads category, says Ferrero. And a major part of its marketing support is provided by high-profile TV advertising.
Last year the company launched Nutella & Go – a portable pack containing the hazelnut and cocoa spread on one side and breadsticks on the other. Since launch in August 2014 it’s said to have delivered £9.1m worth of sales.