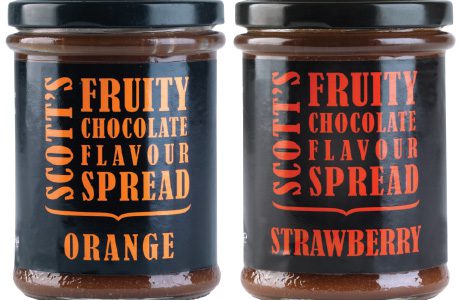 SCOTLAND’S food industry has long included important jams and preserves producers.
But sweet spreads as a category has been marked in recent years by growth in sales of chocolate and hazelnut spreads. Now Scottish independent jam producer R&W Scott is set to bring consumers the best of both worlds. It’s broadening its product range by launching two fruit-based chocolate flavour spreads –Scott’s Strawberry Fruity Chocolate and Scott’s Orange Fruity Chocolate.
Scott’s new spreads are made with fruit and the Scottish firm argues they provide a healthier alternative to chocolate spreads, with 66% less saturated fat, and 35% fewer calories but “no compromise on taste”.
The new spread is made at the jam producer’s base in Carluke in Lanarkshire and R&W Scott says it can be used in several ways. It sees it as a way for consumers to liven up breakfast by using it as a topping for porridge, pancakes, toast and cereal. It can also be used in home-baking as a filling and topping.
John Easton, managing director of R&W Scott, said: “Chocolate spread is demonstrating strong growth and Scott’s two new fruity chocolate spreads have been designed to capitalise on that growth.
“We’re delighted by the taste and mouth-feel of these spreads, which offer a healthier option for those who love chocolate spread but are looking to lower fat in their diets. We will be introducing more flavours soon.”
Scott’s Fruity Chocolate Flavour hit the market last month, the spreads are available in 225g clear jars with strawberry or orange-coloured labels.
RRP is £1.00.