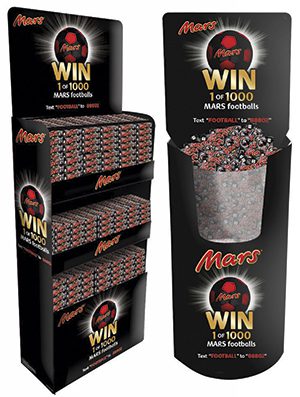 SOCCER prizes and PoS dumpbins are being used to encourage more Scots to buy Mars Bars this summer.
As part of a UK-wide £10m football-themed media campaign from Mars Chocolate the 1 of 1000 promotion will prioritise Scotland.
Through the promotion, shoppers are invited to enter the draw by text to win one of a thousand branded footballs.
The campaign ties in to the recently launched Mars Winning campaign, which celebrates what the brand owner calls “everyday wins”.
Bep Dhaliwal, trade communications manager at Mars Chocolate said: “The new campaign will focus on uplifting sales amongst Scottish retailers, with the promotion featured on a host of eye-catching PoS materials, such as dumpbins and posters.
“The text to win promotion looks to generate even more opportunities for retailers to capture the attention of customers. With 70% of confectionery bought on impulse, we know that stand-out PoS materials really help retailers take advantage of this huge opportunity,” she said.
Mars currently has a team of 400 advisors visiting UK stores to advise on merchandising products.