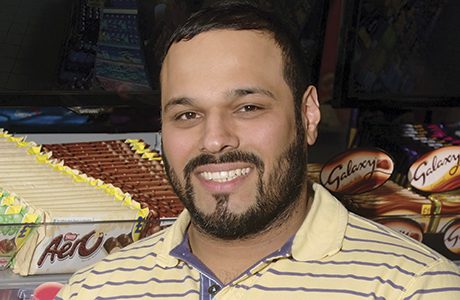 Jagtar Lalli is the owner of two convenience stores – the Premier in Kilmaurs and the Scottish Grocer award-winning Day-Today in Hamilton Street, Saltcoats.

How optimistic do you feel about convenience retailing?
It’s hard. It is a competition. A lot depends on what the independent shopkeeper wants out of his business. Whether he’d rather just sit at square one and not go anywhere and whether he wants to try new things, see what the competition’s doing, try and grow. You have to put the work in. You need to be out and about and you need to invest in your shops as well. I think a lot of shops I see try to go for a cheaper product, cutting corners, unwilling to spend a few grand on something that’s going to add real value to their shop. But it is hard.

Which areas currently present the best opportunities?
I’d say chilled. We work very hard on our chilled offering, but it’s still very difficult to persuade people to shop the store, rather than just coming in for a packet of cigarettes. That’s why we moved the chilled from the back of the shop to the front. There is still a bit of waste, but we are selling lots of things like chicken legs, breasts and mince now, rather than just milk and juice. The reason most people come to our shops is for booze and fags, and I’ve no problem shifting that. But on things like grocery lines, that’s where we need some better deals. We want people to come in and do a decent spend, treat us the same way they would a supermarket.

What are the biggest difficulties facing convenience retailers right now?
Competing with supermarkets is the main one, but also bank charges, ever-increasing rates, the things that the customer doesn’t see. Some folk think you just stand behind a till and that’s it, but there’s a lot going on in the background with charges and even suppliers sending you short-dated stock. That’s a headache as well, because you try and take it back and they refuse.

How can these problems be overcome?
You have to be a member of a symbol group now. That’s the only way to compete. It saves you having to go and do deals with the cash & carries. They’ll do deals on your behalf and there are fascia groups out there, like Premier, that won’t take a charge. We used to pay £40-odd a week to one of the groups that we were with, but we’re not paying a penny to the groups we’re with now.

Is your business facing any special challenges?
We’re just trying to keep our head above water, to be honest. We’re getting stock in, doing deals, competing with supermarkets. The challenge is changing people’s mind about the kind of shopping they do at the local corner shop. People always have it in their heads that the supermarkets are cheaper, but I do go online and compare our prices. Any big deals we put on Facebook and I’ll only put them on if I can compete with the supermarket price or beat them. A lot of shops are facing the same challenges, where business is quiet due to the state of the country.

Do you plan to make changes to your layout or range?
In our Saltcoats store, I’m going to try and get our cigarette gantry removed and replaced with something under the counter. That way we can make use of the space for more specialised vodka, maybe a fridge to keep champagne and other expensive stuff. That’s something people do ask for now. The supermarkets aren’t selling the speciality products, so there’s nowhere else people can really get them. They have to go to Glasgow. But if you can get a specialist product closer to home you will. And it gives us a niche, another way to differentiate ourselves in the market.

This interview is part of the Scottish Grocer New Generation series where we ask leading modern Scottish c-store retailers, from all across the country, about how they see the business and about key issues of the day. It’s SG’s New Generation – the people who will be shaping the business now and for years to come. We’re currently looking for new generation retailers with new ideas from all across Scotland. If you’d like to take part we’d love to hear from you. Just contact John on 0141 567 6032 john.mcnee@peeblesmedia.com