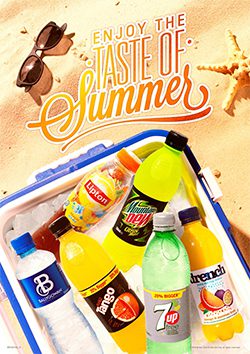 ACCORDING to Britvic two thirds of on-the-go soft drinks sales are recorded between March and October.
And it has revived its Taste of Summer promotion to take advantage.
Nigel Paine, GB commercial director for out of home at Britvic Soft Drinks said: “The campaign aims to maximise sales opportunities in this already lucrative season.
“Britvic’s leading brands including Tango, 7Up and Lipton will drive the campaign as part of a continued commitment to invest in the impulse and convenience channel.”
He said that Britvic’s on-the-go value sales repeatedly display strong over-performance in the period, rising, for example, by 14.5% between spring and summer in 2014.
“We’ve revamped the look and feel of the campaign which we’re confident will drive customers to the chiller,” he said.