CHANGES to the fees and retailer commission system run by in-store payment network company Paypoint have incensed the National Federation of Retail Newsagents and have seen some retailers take to social media to accuse the company of exploiting c-store operators.

New Paypoint rates, applicable from this month, will cap retailer commission for receiving general bills and budget payments at 10p per transaction, down from 13p. Other commissions, including those for pre-pay energy transactions are capped at 7p, down from 10p. 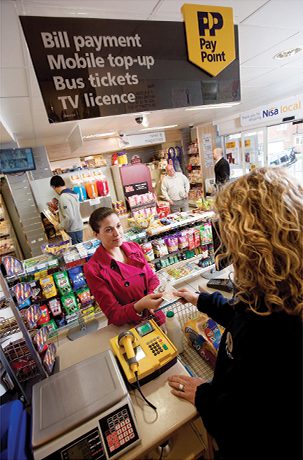 Award-winning Scottish retailer, and Scottish president of the NFRN, Shahid (Mo) Razzaq, of the Premier Mo’s and Family Shopper stores in Blantyre, told Scottish Grocer that it would now cost considerably more to offer Paypoint and he was seriously considering whether it was worth it.

Under the new rates his commission on a typical month’s Paypoint transactions of just under £36,000 would drop from £169 to £120.

“It’s going to cost us £178 to bank that Paypoint cash,” he said. Fees for Paypoint equipment and service cost his business £41 a month and applying a conservative estimate for staff time taken to process transaction means there are wages costs of £90 a month that can be attributed to Paypoint, he said. He calculates that under the new fees and caps regime he will have Paypoint income of £120 and costs of at least £209 a month.

While Paypoint says its service brings footfall many retailers question the amount, Razzaq said. He has asked his local MP, if re-elected, to raise questions about what he sees as Paypoint using a powerful market position to exploit retailers.

“It’s tantamount to exploitation, coming at a time when many independent retailers are struggling to survive, yet the company itself announced pre-tax profits of £46m in the year to March 2014,” he said.

“We are calling on PayPoint to ‘Pay Fair’ and halt its plans to slash commission caps or we will be pursuing every legal avenue open to us to stop this abuse of market dominance.”

For Paypoint, head of corporate affairs Peter Brooker said the Paypoint service had never been just about commission.

• What’s your view? Will the new caps affect you badly? Do you think they are justified by other benefits? Contact Patrick Duffy 0141 567 6074 or patrick.duffy@peeblesmedia.com

PAYPOINT retailers who are long-standing clients of Santander bank will face another financial hit to add to tighter caps on Paypoint commission.

A special Paypoint deal that was in place many years ago when Santander took over the Alliance & Leicester bank, and which offered a small monthly fee and 9p per £100 cash deposit fees, is being withdrawn by Santander and replaced with accounts that will charge 50p per £100 above monthly deposit limits of up to £10,000.

Shahid Razzaq of Premier Mo’s in Blantyre told Scottish Grocer that when he did the arithmetic  he had been shocked by the extra costs involved. He is now looking for other options.

Santander told SG it was reducing the number of accounts from 67 to four and increasing the ability of customers to “self-serve”.

The Paypoint deal had been closed to new accounts five years ago.

Paypoint said it has a current special deal with Barclays, a bank with few branches in Scotland, and is seeking deals with at least one more bank.