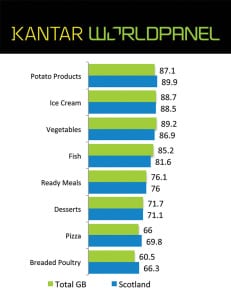 ROZEN foods have done well since the recession arrived. A number of frozen food sub-categories, especially burgers, were negatively affected by the horse meat scandal but even those have bounced back.

And it looks as if last year frozen products had a relatively good time once again, especially in Scotland.

Mark Thomson, business unit director of retail research specialist Kantar Worldpanel told Scottish Grocer that the take-home GB frozen food category was worth £5.7bn over the year to 4 January 2015, and had grown by 0.8%. However in Scotland, where the category is now worth £513m, growth was ahead of GB performance – sales north of the border were up by 2%.

There are frozen food sub-categories that are especially strong in Scotland.

Potato products account for 14% of all frozen food spending in Scotland compared to 11.8% in total GB.

Sales of ice cream represent 16.2% of frozen food spending in Scotland as compared to 14.9% across all of GB, despite the weather being colder. Other strong frozen food sub-categories in Scotland include frozen desserts, pizza, and sausages.

However, in the 12 weeks up to Christmas, frozen food had a tough time with sales down 1.4% in Scotland which was partly due to shoppers trading up to fresh and chilled equivalent food.