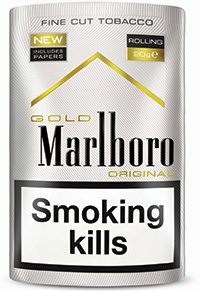 GIANT brand Marlboro is now available in the UK in more formats than ever, including RYO and capsule cigarette lines.
RYO has seen several years of growth and last year almost half of all adult smokers stated a preference for RYO products, said Jerry Margolis, Philip Morris sales director in the UK and the Republic of Ireland.
“We predict continued growth for 2015, especially now that Marlboro has entered the category. Marlboro Gold Original rolling tobacco offers adult smokers the brand heritage and quality of Marlboro, the number one premium cigarette brand in the UK in a new format,” he said.
“Capsule cigarettes are a segment not be ignored. Marlboro Ice Blast has contributed to the segment’s impressive growth.
“Unlike other capsule products, Marlboro Ice Blast offers a unique cooling flavour from the start and the fresh taste can be further enhanced by crushing the Iceball capsule, allowing the adult smoker to experience a powerful burst of high cooling flavour.”