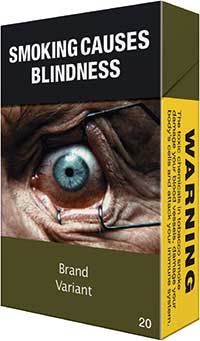 RETAILERS and tobacco firms have reacted with shock to news that the Westminster Government will push forward with plain packaging legislation before the general election.
In a surprise move, Westminster public health minister Jane Ellison announced plans to approve standardised packaging, subject to a free vote, before the end of this parliament.
If carried by a Commons vote plain packs could be in place by next year. The Scottish Government is in favour and the Scottish Parliament has already agreed that plain pack legislation passed at Westminster could be extended to Scotland.
The Scottish Grocers Federation slammed the move and said it remained concerned about what it sees as draconian penalties (of up to two years imprisonment) that could be levied on retailers under the proposed law.
It has urged Elzbieta Bienkowska, the EU Commissioner for the Internal Market, to review the proposed penalties.
“We are shocked that the UK government has made this announcement before it has even responded to its own consultation on plain packs and while the EU standstill period is still in place,” said public affairs manager John Lee.
Jeremy Blackburn, head of communications at JTI, said: “It is inexplicable that the government is rushing to legislate on this important issue, which was opposed by nearly two thirds of the respondents to a public consultation.”
Melvin Ruigrok, general manager of Imperial Tobacco UK, said the government should evaluate the effectiveness of current tobacco control measures before proceeding with standardised packaging.
He added: “No credible evidence has been forthcoming that it will contribute to improving public health.”
At present many analysts expect the Commons to vote yes to plain packs. But it’s also thought some MPs, including some ministers, might oppose the move.