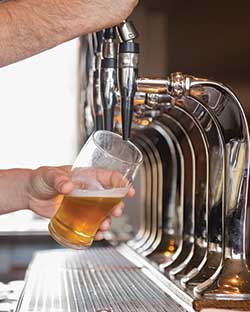 BRITAIN’S pub estates have seen units change to c-stores in recent years. But one of the country’s biggest pub groups reckons there’s scope for talented retailers to take up opportunities in the on-trade.
Alasdair Lindsay, who recently joined Punch Taverns as a partnership development manager in Scotland, knows a lot about the type of person who works in retail north of the border, because he worked in retail himself – with Botterills and latterly with Scotmid.
Punch currently has 12 to 15 premises of different types – from city-centre bars and community pubs to food-led outlets and Highland hotels – available on partnership agreements.
He said partners from many different backgrounds but new to the licensed trade have been successful using Punch’s Foundation Tenancy, which he describes as an award-winning five-year scheme that’s similar to a franchise arrangement and features major support from Punch while new partners learn about the on-trade.
Depending on the site it will take about £5,000 to £10,000 of funding for a new partner to get up and running, he said.
But retailers and retail managers with good business acumen and experience of working in communities could be well-suited to an on-trade opportunity, he suggested.
For retailers and others there’s more information available at the pubco’s website
www.punchtaverns.com