BRITAIN has a well-established biscuits culture but in recent years cookie brands from the US have targeted the UK market.

Chips Ahoy is the latest big-name American brand to land on British shores. Owner Mondelez International reckons it will soon be worth £50m in the UK.
Chips Ahoy Popcorn Candy Chip and Chips Ahoy Crispy Choco Caramel – lines exclusive to the UK – are being supported by £8 million of marketing expenditure over 18 months. 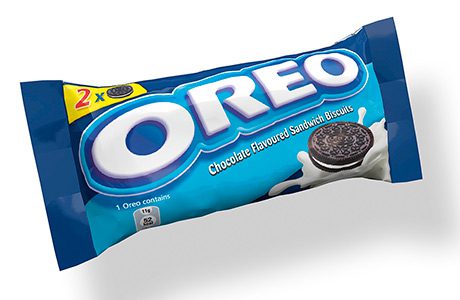 Rick Lawrence, who heads up the biscuits category for Mondelez International UK, said: “Our exclusive Chips Ahoy recipes have been developed to appeal to consumers who are looking for exciting experiences – something that’s currently missing from the biscuit category.
“By bringing these new, younger shoppers into biscuits, retailers can expect to drive sales with a ground-breaking new product.”
With Chips Ahoy, Mondelez aims to repeat the success it says it has had with another US brand, Oreo, which was launched UK-wide in 2008.
According to Nielsen figures quoted by the company, the brand is now worth £34m in the UK and growing at 13%.
Mondelez says Oreo is now a UK family favourite for afternoon snacking and for packed lunches, particularly its Oreo two-biscuit Snack Packs, launched in 2012.
“Everyday treats are an important range for retailers,” said Susan Nash, trade communications manager at Mondelez International. “Oreo is performing strongly and should be a core brand for independent retailers.”
Nash also recommends stocking Belvita to meet demand for healthier biscuits and Mini Ritz crackers.
• Natural Balance Foods has launched an updated range of four flavours of Trek protein energy bars.
New packaging featuring splashes of colour as well as illustrations of scenery from across Europe.
The firm claims Trek is showing growth of 553% on 2013 figures and says the recent relaunch of its Trek Flapjacks, helped add £1.2m worth of sales and move the brand from 35th position in the healthy biscuits singles category to 14th place.
The four bars in the range are: Peanut Power, Cocoa Chaos, Banana Blast and Berry Burst.
Trek protein energy bars are now gluten-free as well as dairy-free and wheat-free.