SCOTLAND’S convenience stores are becoming more and more defined by the term ‘community’. They’re service hubs as well as shops, some include post offices, an increasing number take in parcel deliveries, many are involved in healthy eating programmes and more. In many areas, independent retailers are ideally placed to engage with people in their community and drive real social improvements.

Sometimes, however, the challenge can be very considerable.
Premier Mo’s Convenience Store is situated in heart of a housing scheme in Blantyre. While some great work has been done in recent times the area is affected by high levels of unemployment and has had its share of violent crime, as well as some drug and alcohol problems.
Working in an area that faces challenges can be a tough job, but by putting social responsibility at the heart of their business, owners Mo and Roxy Razzaq have made it a deeply fulfilling one.
The judges of the Scottish Grocer Social Responsibility Award, run in association with leading drinks firm Diageo, reckoned Mo and Roxy topped the charts in social responsibility because of the way they addressed the most important real-life issues around alcohol retailing, trained staff very well, developed robust systems, and were completely aware of developments in law, regulation and best practice.
But beyond all of that, Mo and Roxy also actively engage with their customers on issues of alcohol responsibility. They make major efforts to build awareness of the part alcohol and other restricted products play in society. And they’re also clear about how children and young people have to be approached on the subject, in a responsible but also positive way … in a manner that is both no-nonsense and non-patronising.
The store has fingerprint ID and a zero tolerance approach to adults who purchase drink for under-18s. It also has a very good relationship with local police, who know Mo’s Premier will always be receptive to the latest bottle or carrier bag marking scheme.
“It’s no use us doing work in the community then allowing kids to get booze,” he said. “So if we see kids hanging around outside, I’ll go talk to them. I’d rather talk to them than call the police. But if they don’t listen to what I say, then I call the police.” 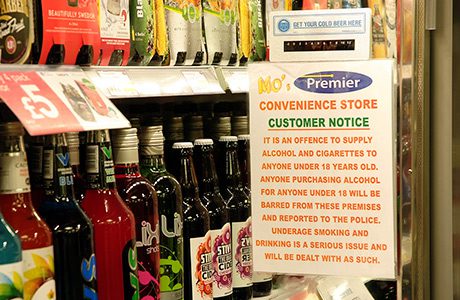 The business has been actively involved in alcohol awareness programmes in local schools. It has also been a great supporter of Alcohol Awareness Week, the programme aimed at the wider population that’s designed to ensure people know about recommended alcohol consumption limits and the alcohol content of different drinks. Premier Mo’s carries the information all year round.
Beyond any minimum regulatory requirements, Mo has imposed a few responsible retailing policies of his own creation.
“If we suspect somebody of buying drink for children, we’ll have a word with them and say ‘listen, we’ll bar you if we catch you’. And if we find out about someone third-hand we might not bar them, but we can stop them being served alcohol.”
The team at Premier Mo’s is also alive to issues of vulnerabilities to alcohol and to potential problems around sales of other restricted goods.
“We did set daily limits on how much booze people can buy. If someone wants to buy six bottles of wine we’ll query them. We put up posters about the daily limits so staff could simply say ‘no, we can’t serve you, it’s Mo’s rule’.”
Staff are trained to give a similar response to a customer if their family has requested that they are not served alcohol.
Team members take their responsibilities to the community very seriously, and that extends into other areas of the business.
For the last six years, the shop has imposed an over-16s policy on energy drinks. The decision was also taken to stop selling fireworks – which used to bring in £1,000 profit a year – after one was put through an elderly neighbour’s letter box.
“By luck, it went into the living room and she could get out the front door. But they set a fire and she could have been trapped. We told everyone we didn’t want that on our conscience.
“We are there to make money. It’s a business. But you have to balance it.”
And at Premier Mo’s, it looks like they’ve got the balance right, proving real change can be affected in Scotland’s communities, without the need for legislation.
“Legislation should be a last resort,” said Mo. “People are changing their habits, but that’s through educating them, showing them there’s a better way, and working with the companies who are already playing ball.”
Of course Mo and Roxy’s outlook on social responsibility is just one part of their wider work in the local community, which is now justly famous.
Much in the surrounding area has improved greatly over recent years and much of that is down to the efforts of the store’s team and their friends. It has been very rewarding even if hasn’t always been easy.
In the early 1990s the Razzaqs founded a youth football team, which quickly became a kind of social club for local youngsters, with fishing trips, Christmas parties and outings to places like Blackpool.
Today they have two football teams and regularly organise fun days and other events for the whole community. They support the local children’s café and pensioners’ bingo as well as a host of charities through donations and raffle prizes.
Mo also keeps in touch with his customers through the shop’s Facebook and Twitter pages, where he is always making new suggestions for things to help improve the area.
He said: “I just jump in with both feet. If I make a mess of it I make a mess of it.
“But, see people, they’ll forgive you anything when they know you’ve just tried something new.” 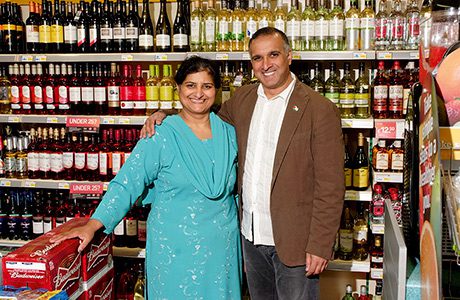 Interview with Mo Razzaq. Mo, above right and his wife Roxy, above left, own Premier Mo’s.

Period at store to date: 24 years

• Shahid was given the nickname Mo, after Mo Johnston, by football teammates.

• Mo and Roxy (Rukhsana) have collected more than 20 awards in recent years. Many have been for community involvement and environmental efforts.

• Mo was born in Edinburgh and is part of a Scottish retailing family. Roxy travelled to Scotland from Pakistan.

• Competition includes a Scotmid next door and an Asda superstore in Blantyre town centre.

• Mo was recently re-elected chairman of the Hamilton Local Licensing Forum and is also vice-president of the Scottish wing of the National Federation of Retail Newsagents.

• Mo opened his second shop, in nearby High Blantyre, in December 2013. It is run under Booker’s new discount fascia Family Shopper.