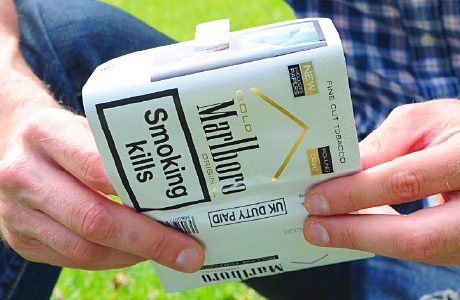 Around 90 years after the Marlboro cigarette brand was launched, tobacco company Philip Morris Limited has released the first Marlboro RYO product for the UK market.
The firm says Marlboro has been the world’s number-one tobacco brand since 1972. Now it has introduced Marlboro Gold Original rolling tobacco, with RRPs of £4.40 for 12.5g and £6.90 for 20g pouches, both of which include gummed rolling papers in the pack.
Marlboro Gold Original rolling tobacco launched in September, and is the first product to be fully sold, distributed and supported by PML.
All PML’s factory -made cigarettes will continue to be distributed by Imperial Tobacco until the end of 2015.
Marketing director for PML in the UK and the Republic of Ireland, Zoe Smith said: “This is the most exciting news from the Marlboro brand in many years and we will be fully supporting the launch of Marlboro Gold Original rolling tobacco nationally across all channels.
“The rolling tobacco market has grown in both volume and value to be worth almost £2bn a year, so this is an ideal time to launch Marlboro into the category.
“Last year almost half of all adult smokers stated a preference for roll-your-own products and as Marlboro Gold Original is now available in a premium rolling tobacco format, consumers can enjoy the perfect blend of taste and price from the UK’s Number One premium brand”.