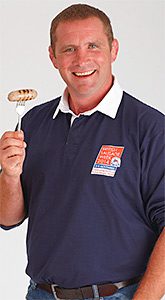 The international rugby star, said to have been nicknamed Raging Bull, who played for England and the Lions and won Celebrity Masterchef in 2011, will be leading the celebration of British Sausage Week from 3-9 November. As part of the nationwide British Sausage Week 2014 tour, Phil will be sampling some of the finest quality-assured sausages across Britain.
The sports star was raised on a farm in Devon and, since retiring from professional rugby in 2010, has been an official ambassador for the Prince’s Countryside Fund.
He said: “I am proud to be an ambassador for British Sausage Week 2014. With a farming background, and also being a keen cook myself, British Sausage Week is a cause close to my heart.
“This year we are encouraging you all to join us in our celebration of Britain’s sausages.
“Versatile, great tasting and also great value, sausages are the perfect option for the whole family to enjoy. So join me in celebrating the best of our British bangers.”