INDEPENDENT Highland grocer Murchie’s of Kingussie has closed its doors and signalled the end of an era after the retirement of two brothers who spent almost four decades in the store.
The shop, which was a Costcutter and will re-open in a few weeks as a Co-op, had served the local community as a licensed grocer and fine foods store, in the hands of brothers Freddy and Bobby Nield for 37 years.
“It’s just time to retire,” Bobby said. “Co-op had approached us and the way the grocery trade has gone we think they’re more than likely the best fit for a town in a remote area like this.”
Located in the middle of the Highlands, around 12 miles south of Aviemore, the shop provided a broad range of essentials plus luxuries to customers including locals and holiday makers.
With a shop floor of 2,700 sq ft, Murchie’s had space for a large cheese counter, a varied selection of fine wines, spirits and gourmet food, alongside staple goods.
“A lot of the trade we get comes from Glasgow and Edinburgh,” said Bobby. “The comment we get most often is, ‘We don’t have a shop like this in the city’.
“We have customers who have estates around here who give us huge accounts every year. They’re just as important to us as the wee wifey on the corner.”
The store was established in the early 1930s by the Murchie family of Ayrshire. In the 1960s, it was purchased by a Polish army captain who sold it to the Nield brothers in 1976.
Both Freddy (69) and Bobby (67) had been semi-professional footballers in Inverness. Freddy was also a time-served grocer, one of the last to undertake a full apprenticeship in Scotland.
“He joined at a time when you would serve everyone over the counter, bone bacon, make up butter, all those things,” said Bobby. 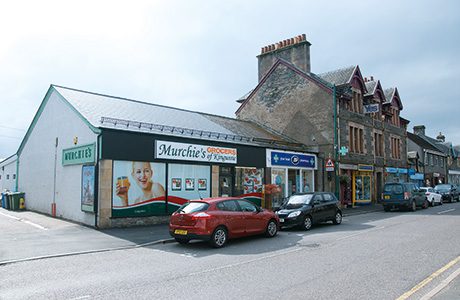 “He is a grocer in the true sense of the word and at one time I considered renaming the shop Freddy’s, because he really is a larger than life character.”
Looking back, Bobby said his time at the shop felt amazingly brief.
“It certainly doesn’t seem like 37 years. There have been huge changes in the grocery trade in that time, but to a great extent everything stays the same.”
Graeme Irvine, the sub-postmaster at neighbouring Newtonmore, said the brothers had been a shining example of how to run a rural community store.
“They try to meet local need, have a fantastic rapport with their customers, employ local staff and have given many teenagers their first employment,” he said.
“They have also stuck to their grocery principles. All the local estates will definitely miss them.”