THE tobacco industry and tobacco retailers are used to dealing with regulation. Usually it’s just a case of getting on with things.

But we’re now well into the final year before the tobacco retail display ban is introduced to almost every store in Scotland. Under the ban, all tobacco and related goods have to be obscured from view except (with significant restrictions on the space revealed) when sales are being made or when equipment is being re-stocked.
And the various tobacco companies certainly aren’t downplaying the change.
“The next few months are going to be a crucial time for the tobacco category. With the display ban looming, retailers will soon be left with little choice over the layout of their gantry. However, the importance of providing a range covering premium, value and niche tobacco brands remains,” said Zoe Smith, marketing director for Marlboro brand owner Philip Morris Limited in the UK and the Republic of Ireland.
“2015 is going to be make or break for many tobacco brands, and retailers should carefully review all new product development to assess which products deserve space on the gantry and will capture consumer attention enough to ensure cut-through once the displays go dark,” she added. 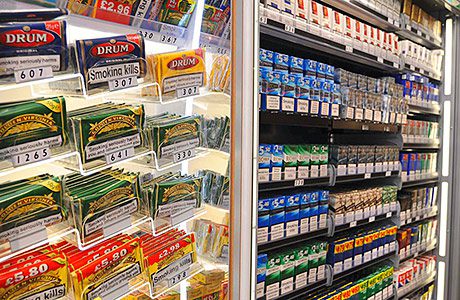 Mayfair and Amber Leaf brand owner JTI’s head of communications Jeremy Blackburn said the implementation of the retail display ban represents the biggest upheaval the category has witnessed in recent years. “Whilst it may seem like a long way off, only stores that start preparing now will see a smooth transition,” he said.
And there are similar messages from Imperial Tobacco where head of independent retail Andrew Miller stressed that retailers should analyse sales now to be well informed, ahead of the changes, and from Scandinavian Tobacco Group UK where head of marketing Alan Graham said: “It’s extremely important for retailers to get their gantry in order sooner rather than later.”
But what are the key issues? What have the firms learnt from existing dark markets such as supermarkets in the UK or stores in other countries?
JTI says it found that in supermarkets there were, overall, minimal shifts in sales but noticeable impacts on in-store operations. In particular, queue times increased at the point of purchase as people questioned staff about availability and price. In the short term, staff experienced difficulty in locating tobacco products.
Imperial Tobacco’s Miller said: “One thing we learnt from our experiences in Australia is that availability drops in a dark market.
“Getting into the habit of carrying out regular availability checks and marking key lines off on a checklist now will make the transition far smoother in 2015.”

Phillip Morris’s Smith said: “Staff knowledge particularly impacts the performance of tobacco sales. It is important for the education process to start now to ensure high levels of customer service.”
Several of the tobacco firms have already begun work to manage the change.
JTI says it’s investing heavily in its business advisors to provide frequent, high-quality visits to retailers. And it argues that in a restricted market key principles of category management will be more important than ever.
So it’s stressing its existing category management advice to store operators, which it gives the mnemonic name “ARTIST” as it highlights the need for best practice in availability, range, training, innovation, sales and technology.

JTI argues that store operators shouldn’t use the move to a dark market as an excuse to de-stock tobacco lines.
“It is more important than ever to maintain a strong range and portfolio going into a display ban and beyond,” said Jeremy Blackburn.
“It is tough enough trying to keep custom from existing adult smokers in an environment where brands can be seen – and it is likely to be even more challenging when they can’t be seen.”
At Imperial Tobacco, Andrew Miller said: “We are distributing dark market information packs which contain key information about the forthcoming display regulations.
“Our message and focus on assisting Scottish retailers is clear: while physical barriers will go up on 6 April 2015, mental barriers will be removed if best practice in ranging, merchandising and availability is already a natural and understood part of everyday tobacco management.”
STG UK is working closely with a number of retailers that it has chosen as its “Gantry Guardians”. The idea is to offer retailers guidance and peer-to-peer advice to help them avoid loss of sales when the market goes dark.
The firm has also produced its Gantry Guardians’ Guide to Tobacco – a four-page report with advice on things to bear in mind when undertaking a range review, as well as important diary dates and tips on how to prepare for the dark market.
STG UK’s Alan Graham said: “Our Gantry Guardians are experiencing the same struggles and challenges as other retailers and so are able to offer first-hand advice on how to prepare.”

The Gantry Guardians’ Guide to Tobacco is available through STG UK reps and will be handed out at trade and depot events through the year.
Of course the dark market isn’t the only thing happening in tobacco. There’s a full-blown market out there that continues to experience change as consumers spend more regularly on economy brands of cigarettes. They’re also increasingly using RYO tobacco, seeking keen prices, but also seem willing to experiment with new types and flavours of tobacco and with the growing number of dual-flavoured capsule cigarettes.
In factory-made cigarettes the trend is still very much towards economy lines.
Imperial Tobacco’s regional business manager for Scotland, Darren Attwell said: “Price sector trends have remained consistent over the last few years. The economy price sector has shown growth, both in terms of volume and share of market, and currently accounts for around 45% of the market.
“The JPS ‘Silver’ range has continued to do well over the last 12 months with sales increasing month on month and the brand continues to hold a market share of over 9%.
“In March this year we launched a new addition to the Lambert & Butler family, in the form of L&B Blue. We have already achieved a 1% market share and sales of L&B Blue have remained consistently strong since its launch.”
JTI says value now has a 45.3% volume share of the ready-made cigarettes market with more than one in three cigarettes sold in the UK now a value brand. Its brand Sterling is both the UK’s number-one cigarette brand and the top-performing value brand, the company says.
Zoe Smith at Phillip Morris said value cigarettes were still showing considerable growth and its brand Chesterfield had seen sales double in the last year.
Price points are very important, several of the firms stress. And that has seen many brands released in 19-stick packs and in price-marked packs.
RYO tobacco is still the big growth story in the UK tobacco scene. Ahead of the dark market we see the great majority of the tobacco firms carrying out work on their brands.

One significant trend is the introduction of smaller-than-traditional packs with weights of 10g or less. Several of the brands have also been including papers in packs.
STG UK has stated that it intends its RYO brand Salsa to be the cheapest per gram because it fully expects many consumers to ask for the cheapest available once the market goes dark.
But not all the work on RYO is about price. A number of firms have launched or might be ready to launch RYO extensions of existing ready-made-cigarettes. And several have been keen to bring speciality RYO brands to market.
JTI recently launched Amber Leaf Signature blend featuring organically grown tobacco.
BAT has extended its range of Cutters Choice blends and there are now a number of blends that stress they are additive-free.
JTI’s Sterling RYO is set to get a makeover this month along with a reduced price point and smaller pack size (9g).
And value is making its way into the cigars market too.
STG, which owns market-leading Café Crème has in the last year launched what it sees as an entirely new sub-category of cigars. It terms the sub-category “Super Value For Money”, or SVFM. The product, Break Little cigars, joins the value line Moments and the Café Crème portfolio of miniature cigars.
JTI, the company behind the Hamlet brand, says miniatures still heavily dominate UK cigar sales but argues that large cigars are still important and profitable.
Imperial Tobacco says there are over 400,000 UK adults who choose to smoke cigars and spend over £275 million per year on their preferred brands. The UK mainstream cigar market is still clearly segmented into three sectors according to size; miniature, small and large. Miniature cigars continue to grow their share of total cigar sales and now account for more than 67% of the market.
Imperial’s Montecristo Mini cigars have recently been introduced to Scotland.